Despite Rising Inflation, One Governor Pushes for $2,000 Stimulus Checks 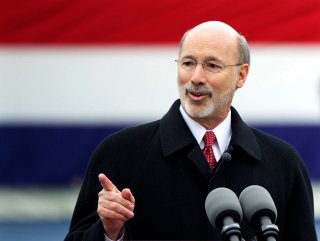 Stimulus checks, which the federal government distributed on three separate occasions in 2020 and 2021, are likely a thing of the past, at least in the short term. But one governor is calling for the return of stimulus checks in his state.

This week, Pennsylvania Gov. Tom Wolf, a Democrat, touted a plan for $2,000 direct payments to families in the state. The checks would be paid for with leftover state funds from the American Rescue Plan Act of 2021 and would go to families whose household income is less than $80,000.

"I'm talking about $2 billion that's sitting in a checking account out in Harrisburg that if we don't use it by the end of 2024, we have to send it back to Washington. Do you want to do that? I don't," Wolf said while promoting the plan in West View, Pa., TV station KDKA reported.

Wolf also said that the payments would help Pennsylvanians deal with rising inflation. The plan, costing $1.7 billion, was first introduced back in February.

“I first introduced this plan four months ago,” said Governor Wolf. “A lot has changed since then, from inflation to price increases to war in Ukraine. Pennsylvanians need our support, even more, today than they did in February. Under my plan, Pennsylvania households earning $80,000 or less will get up to $2,000, and they can use the money for whatever they need,” Wolf said in an official statement last month on his website.

He argued if the Rescue Plan funds are not spent in time, they will be returned to the federal government at the end of 2024. Wolf also called for a minimum wage increase to $12 an hour with a “pathway” to a $15 per hour minimum rate.

The odds look long, especially since Republicans control the state legislature and oppose the proposal.

First elected governor in 2014, Wolf was a relatively uncontroversial figure for much of his tenure and was re-elected with little difficulty in 2018. However, he drew the ire of many with COVID mitigation policies during the pandemic.