Deutsche Bank Predicts That America Is Headed Into a 'Major Recession' 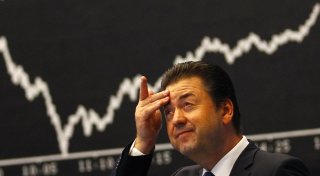 After becoming the first major bank earlier this month to predict that the United States will eventually fall into a recession, Deutsche Bank is doubling down on that call.

As reported by CNN Business, the bank is now sounding the alarm of an even deeper downturn that is largely driven by the Federal Reserve’s actions to temper stubbornly elevated inflation that has reached a four-decade high.

“We will get a major recession,” Deutsche Bank economists wrote in a report to clients earlier this week. They added that while inflation may be peaking, it will likely take a “long time” before it reverts back to the Fed’s stated goal of 2 percent. This indicates that the increasingly hawkish central bank will continue to be aggressive in raising rates, which will, in turn, significantly hamper economic growth.

“We regard it … as highly likely that the Fed will have to step on the brakes even more firmly, and a deep recession will be needed to bring inflation to heel,” the economists continued. “Our view is that the only way to minimize the economic, financial and societal damage of prolonged inflation is to err on the side of doing too much,” they added.

However, not all banks are offering such a bleak outlook for the U.S. economy. According to Fox Business, Bank of America CEO Brian Moynihan had a slightly more positive stance on Wednesday on the program “Mornings with Maria.” Mr. Moynihan said, “the Fed knows they have a job to do to tackle inflation and the question is, what happens on the other side of that,” he told host Maria Bartiromo, stressing that “that’s one of the tricky executions.” He further stated, “the debate is [whether] there’s a recession on the other side,” he added. “Our people don’t think so. They have this year’s growth at 3 percent plus, next year’s growth just under 2 [percent], which will be under the long-term trend.”

Similar sentiments were shared by Goldman Sachs, which has conceded that although it will be “very challenging” to bring down rising inflation and wage growth, that doesn’t necessarily mean that a recession is “inevitable.” Goldman Sachs asserted, “we do not need a recession but probably do need growth to slow to a somewhat below-potential pace, a path that raises recession risk,” Goldman Sachs economists wrote in a report late last week.

The banks’ reports come as Fed Chairman Jerome Powell confirmed last week that aggressive rate hikes are likely to be green-lighted as soon as next month. “It is appropriate in my view to be moving a little more quickly” to raise rates, he said while part of an International Monetary Fund panel. “I also think there is something to be said for front-end loading any accommodation one thinks is appropriate. … I would say 50 basis points will be on the table for the May meeting.”