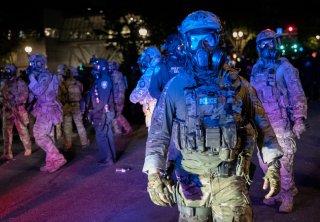 Acting Homeland Security secretary Chad Wolf defended the department’s deployment of federal law enforcement in Portland, Oregon, noting that they “were abandoned” by state and local officials, leaving officers with "chemical burns, bloody wounds” and some with permanent eye damage.

Wolf testified before the Senate Homeland Security and Governmental Affairs Committee Thursday on the department’s excessive response to the uproar in Portland, emphasizing in his opening statement that he has the obligation as secretary to “protect the buildings, grounds, and property that are owned, occupied, or secured by the federal government, and the persons on the property. This statute leaves no room for interpretation—inaction is not an option for DHS.”

“Enforcing federal law is not by invitation,” Wolf later added.

Federal agents were sent to Portland at the beginning of July as violent protests and riots erupted throughout the city—especially thrusts at federal buildings—after the killing of George Floyd in Minneapolis. Deploying federal officers to mend racial disagreements has triggered more unrest, causing protesters and 277 officers to be injured. Federal officials have made 99 arrests in less than one month.

One federal official, Wolf added, retrieved third-degree burns from a blasted firework that fired through the uniform and personal protective equipment.

The Office of Civil Rights and Civil Liberties has gotten “a number of complaints,” according to Wolf, for the agency’s brutal use of tear gas and lethal munitions to tame violent protesters.

Even though the department and local authorities have reached a deal to leave the city and put it in the hands of local law enforcement, Wolf assured that “full, augmented federal force” remains in Portland, on standby, in case of another protest outburst. Although there’s been a “noticeable decrease” in violence aimed at federal buildings, the city’s police reported an incident last week involving protesters attempting to fight through fences to reach federal buildings.

“Make no mistake: there continues to be violence in Portland,” he said. “While this violence is not directed at the federal courthouse, DHS officers remain on alert should it return.”

Republicans sided with Wolf, thanking him and the department for their continuous battle to protect the city and federal buildings. The party’s officials also criticized local law enforcement for not providing help to federal officers, as some were “assaulted with, among other weapons, mortar-style commercial-grade fireworks, accelerants, IEDs, sledgehammers, concrete, and slingshots.” President Donald Trump has previously chimed Wolf for using federal force in Portland.

On the other side of the aisle, Democrats pressed Wolf about the department’s training methods using tactical gear, unmarked vehicles and “chemical irritants,” but Wolf ensured the Senate panel that officers were just doing their "statutory mission" to save and protect the city and its federal buildings.

"They have called our law enforcement professionals ‘stormtroopers,’ the ‘Gestapo’ and ‘thugs.’ These are offensive and irresponsible terms,” Wolf said, referring to media outlets and elected officials.

When asked by Sen. Kamala Harris (D-Calif.) if personnel have been disciplined or punished due to excessive force at protests in Portland, Wolf responded and said none have been.

Protests in Portland have subsided in recent weeks with the withdrawal of federal law enforcement, easing tensions in the city with hopes it’ll return back to safety.

“Our deployment of law enforcement officers to Portland was . . . done within DHS authorities and not for any political, specific reasons,” he said.