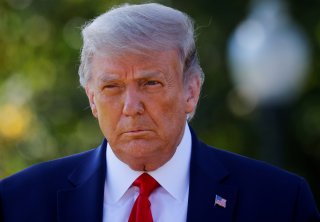 Gas prices, throughout the year, have been steadily rising, with the average price of gas hitting $3 a gallon for the first time since 2014. Prices also spiked earlier this month following the Colonial Pipeline shutdown, although that shutdown proved short-lived.

Some have blamed President Biden and his policies for the rise in gas prices, with Fox News’ Tucker Carlson even going so far as to claim on television that the president “approves of” the shutdown and higher prices.

Now, the ranks of those implicitly blaming Biden for the higher gas prices have been joined by his predecessor as president, Donald Trump.

“With Memorial Day Weekend coming up, tomorrow people start driving in the biggest automobile days of the year. I’m sorry to say the gasoline prices that you will be confronted with are far higher than they were just a short number of months ago where we had gasoline under $2 a gallon,” the former president wrote Thursday, on this “From the Desk of Donald J. Trump” website that he now uses as a Twitter substitute. “Remember as you’re watching the meter tick, and your dollars pile up, how great of a job Donald Trump did as President. Soon Russia and the Middle East will be making a fortune on oil, and you will be saying how good it was to have me as your President.”

As has often been the case regardless of social media platform, the former president is being misleading.

Per a GasBuddy chart, the only time in Trump’s presidency when the average price of gas was under $2 a gallon was in the spring and early summer of 2020. Those were the opening months of the pandemic when most Americans were stuck at home, very few cars were on the road, and demand for gasoline collapsed. That was the result of the pandemic, not any action by any particular president.

Conversely, prices have begun to rise this year for the opposite reason: With the pandemic receding, demand is rising again, and more cars are on the road.

Meanwhile, Politifact has disputed the notion that the U.S. became “energy-independent” under Trump. The nation continues to import oil from overseas.

Many who observe politics are tempted to blame higher gas prices, or credit lower ones, to whoever happens to be president at the time. But in reality, presidents are usually at the mercy of global market forces when it comes to what Americans pay at the pump.