Did the End of the Child Tax Credit Hurt Biden's Popularity? 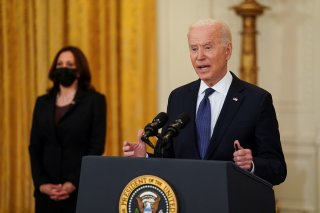 The White House first proposed extending the 2021 version of the credit through 2025, before ultimately settling on a one-year extension, as part of the Build Back Better legislation. That bill died in the Senate last December, which caused the payments to stop at the end of last year.

There have been efforts since to revive the credit, with some Democratic senators not giving up. But those prospects look dim at the moment.

Did the end of the child tax credit spell political trouble for the president? A new memo by a progressive political group suggests that it may.

A pair of progressive organizations, Data for Progress and Groundwork Collaborative, teamed up last year on Fighting Chance for Families Action, an effort meant to keep track of “the political feedback effects of the monthly expanded Child Tax Credit (CTC).”

The conclusion from the group’s latest memo is that a notable number of voters realize the Democrats are responsible for the credit and are appreciative of it—but that they’re also unhappy about the Democrats allowing the credit to expire.

“While not massive, these effects are clear at the margins – which is extremely important in politics,” the memo said. “This is particularly true of the expanded CTC, which is a case where the policy design features that have led to unambiguously successful policy outcomes such as reductions in child poverty appear to also be the key factor in maximizing the potential for positive political feedback.

“Monthly checks give families financial stability because they’re reliable. There’s no need to wait for tax time to receive the money, and families can use the cash right away if they need to. This flexibility can be especially important if families experience changes in income due to loss of employment, illness, or whatever else life may throw at them, and it gives the program an extra poverty-fighting benefit.”

As pointed out by HuffPost, the Fighting Chance for Families Action study found that those who received the child tax credit checks were more likely to support Biden, but they may have become less likely to support the president once the checks went away.

Meanwhile, Politico reported Monday on frustration among Democrats how the Child and Dependent Care Credit, also passed with Democratic votes, has gotten little attention in Washington, compared with the “other” child tax credit.