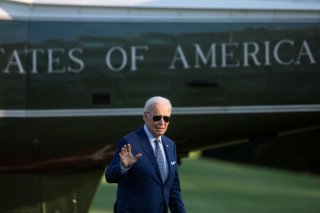 In a new interview with CBS 60 Minutes that aired on Sunday, President Joe Biden said that he intends to run for re-election in 2024 but has not yet made a “firm decision.”

“Look, if I were to say to you, I'm running again, all of a sudden, a whole range of things come into play that I have—requirements I have to change and move and do. In terms of election laws. and it's much too early to make that kind of decision. I'm a great respecter of fate. And so, what I'm doing is I'm doing my job. I'm gonna do that job. And within the timeframe that makes sense after this next election cycle here, going into next year, make a judgment on what to do,” Biden said.

“Look, my intention as I said to begin with is that I would run again. But it's just an intention. But is it a firm decision that I run again? That remains to be seen,” he continued.

Biden, who will be eighty-one years old in 2024, also took time during the interview to push back on concerns about his fitness for the job of commander-in-chief.

“Watch me. And honest to God, that’s all I think. Watch me. If you think I don’t have the energy level or the mental acuity, then, you know, that’s one thing. It’s another thing, you just watch and, you know, keep my schedule. Do what I’m doing,” he said.

“I respect the fact that people would say, you know, ‘You’re old.’ And—but I think it relates to how much energy you have, and whether or not the job you’re doing is one consistent with what any person of any age would be able to do,” he added.

According to a recently released Yahoo News/YouGov poll, Biden is leads former President Donald Trump by six points among registered voters in a hypothetical 2024 presidential rematch. Conducted September 2 to 6 with the participation of more than 1,600 adults, the survey found that if the next presidential election “were held today,” 48 percent of registered voters would select Biden, while 42 percent would choose Trump.

Meanwhile, more Democrats are now saying that America is “generally headed in the right direction” (48 percent) than “off on the wrong track” (38 percent). Last month, those figures were reversed.

“As a result, Biden has strengthened his standing for 2024, which had been looking unusually weak for an incumbent,” Yahoo wrote.

As for a potential Trump run, 55 percent of respondents said that he should be barred from being elected again if he is found guilty of “mishandling highly classified documents” or “obstructing” the ongoing investigation by the Justice Department.