Did a Lack of Stimulus Checks Help Cause Employment to Surge? 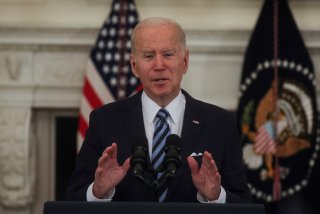 Friday morning saw the release of a blockbuster jobs report, as the U.S. economy saw an increase in 467,000 jobs in January, despite the Omicron variant running wild for a large part of the month.

While some recent jobs reports have fallen short of expectations, this one went the opposite way, with the consensus among analysts placing the jobs number closer to 150,000. The Hill reported, on the eve of the report’s release, that economists had been “bracing” for the report to be negative, with some speculation that jobs could even be lost.

There was also a significant upward revision of previous months, with November and December numbers revised upward by around 700,000 jobs. June and July numbers, however, were revised downward.

"The January employment report topped expectations in nearly every way possible. The labor market's recovery easily leapt over the hurdle thrown up by the Omicron wave in January," Wells Fargo economists Sarah House and Michael Pugliese in a note to clients, as quoted by CNN.

One thing worth noting about January is that stimulus checks have been long gone since last summer, and January was the first month without the expanded child tax credit.

A USA Today analysis of the jobs numbers looked at that question.

“The ease of finding a better job, the rising wages, and perhaps the (expiration) of the child tax credit last month might have incentivized would-be workers,”  economist Kathy Bostjancic of Oxford Economics told that newspaper. USA Today added that the United States has now regained about 86 percent of the jobs lost since the start of the pandemic.

What that strong jobs performance means for the passage of a continuation of the child tax credit, as well as other possible benefits, remains to be seen.

In praise of stimulus

Writing in The Week last week, columnist Ryan Cooper made an unconventional argument: the stimulus offered by the last two presidents, Donald Trump and Joe Biden, has been successful in dealing with economic calamity, while the measures that were taken early on in President Barack Obama’s tenure, shortly after the 2008 financial crisis, were too unambitious.

Obama’s major piece of legislation, the American Recovery and Reinvestment Act of 2009 was $831 billion, much smaller than packages passed by both Trump and Biden, and too small to solve the problem, Cooper argues.

“We could have had this high-employment, high-wage economy back in 2010 if then-President Barack Obama and massive Democratic majorities in Congress hadn't utterly bungled their most important task: restoring full employment," Cooper wrote. There are lessons, he says, for crises to come.