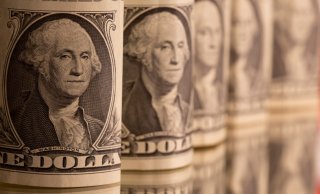 The U.S. economy has been suffering its worst inflation in a generation for over a year. It’s often been suggested that the pandemic-era stimulus checks, both from the CARES Act under President Donald Trump  in 2020 and the American Rescue Plan Act in 2021 under President Joe Biden, are the reason why. Kevin Hassett, chairman of the Council of Economic Advisers during the Trump administration, connected the stimulus with inflation in an interview this week, but he did state that he supported the stimulus.

A recent analysis from the Federal Reserve Bank of San Francisco, called “Why Is U.S. Inflation Higher than in Other Countries?,” makes the case that the stimulus played a major part in the rise of inflation.

“Since the first half of 2021, U.S. inflation has increasingly outpaced inflation in other developed countries,” the analysis says. "Estimates suggest that fiscal support measures designed to counteract the severity of the pandemic’s economic effect may have contributed to this divergence by raising inflation about 3 percentage points by the end of 2021.”

The study did note that the economy "has rebounded at an astonishing rate,” and that the effects of the pandemic on the economy are complicated. But it did find that the “direct fiscal transfers” in the United States  were much larger than those abroad.

“The interplay between when assistance was delivered and how households responded to successive COVID waves created complicated dynamics in the economy. Building these dynamics into a simple model suggests that they may have contributed to about 3 percentage points of the rise in U.S. inflation through the end of 2021,” the board said.

“The comparison between the actual path of inflation and our scenario… suggests that U.S. income transfers may have contributed to an increase in inflation of about 3 percentage points by the fourth quarter of 2021,” the board added. “However, this relatively sizable contribution is estimated with considerable uncertainty because the available sample is too short for any greater precision.”

However, it may not be the only explanation for the rise in inflation.

“The United States is experiencing higher rates of inflation than other advanced economies. In this Economic Letter, we argue that, among other reasons explored by the literature, the sizable fiscal support measures aimed at counteracting the economic collapse due to the COVID-19 pandemic could explain about 3 percentage points of the recent rise in inflation,” the authors concluded. “However, without these spending measures, the economy might have tipped into outright deflation and slower economic growth, the consequences of which would have been harder to manage.”

Biden will give a speech on inflation later this week.