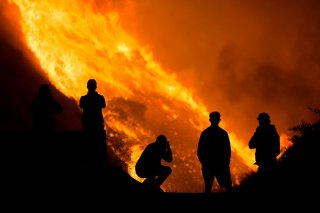 A Canadian doctor has clinically diagnosed a woman as suffering from “climate change” for the first time in history.

The patient, who is “in her seventies came into the emergency department at Kootenay Lake Hospital in Nelson, British Columbia,” according to the Times Colonist, a daily newspaper in Victoria, British Columbia, Canada. The patient’s doctor, Kyle Merritt, “had no idea hundreds of people were dying of heat across the province,” the newspaper reported. He saw firsthand the toll the intense heat wave was having on the patient.

“She has diabetes. She has some heart failure. … She lives in a trailer, no air conditioning,” Merritt told the newspaper.

Her health problems have worsened and she’s struggling to stay hydrated, he said.

After analyzing the symptoms, Merritt eventually settled on the “climate change” diagnosis—a first in his ten years as a physician.

“If we’re not looking at the underlying cause, and we’re just treating the symptoms, we’re just gonna keep falling further and further behind,” he said of his diagnosis to Glacier Media.

“It’s me trying to just . . . process what I’m seeing,” he said. “We’re in the emergency department, we look after everybody, from the most privileged to the most vulnerable, from cradle to grave, we see everybody. And it’s hard to see people, especially the most vulnerable people in our society, being affected. It’s frustrating.”

The late-June heatwave in British Columbia went down as the hottest and deadliest in Canadian history—killing more than five hundred people in the province alone. Additionally, wildfires caused the air quality to become more than forty times worse than levels deemed acceptably safe through July and August.

The medical journal Lancet noted in its annual policy analysis, titled Countdown on Health and Climate Change, that there’s a possibility that even deadlier days are in the offing.

“Today’s adverse health impacts of climate change are varied and widespread. All of us have been or likely will be affected by climate change, with some hazards more easily recognizable than others,” according to the analysis. “Climate change is worsening heat waves, amplifying droughts, intensifying wildfires, supercharging hurricanes, and fueling flood risk through increased heavy rainfall events and rising sea levels.”

“The risks of short- and long-term exposure to extreme heat are among the best-studied aspects of climate change,” the analysis states. “Emerging research has linked heat exposure to poor sleep quality, worse mental health, higher suicide rates, and increased crime rates—in addition to the multiple other threats it poses to health.”