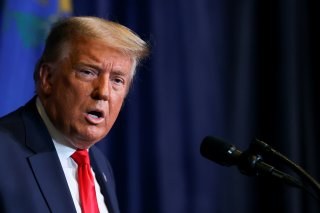 Former President Donald Trump blasted President Joe Biden’s infrastructure, jobs and climate change package on Wednesday, dubbing it a “monstrosity” and “among the largest self-inflicted economic wounds in history” that would send millions of jobs to China.

“This legislation would be among the largest self-inflicted economic wounds in history. If this monstrosity is allowed to pass, the result will be more Americans out of work, more families shattered, more factories abandoned, more industries wrecked, and more Main Streets boarded up and closed down—just like it was before I took over the presidency 4 years ago,” Trump said in a statement.

“This tax hike is a classic globalist betrayal by Joe Biden and his friends: the lobbyists will win, the special interests will win, China will win, the Washington politicians and government bureaucrats will win—but hardworking American families will lose,” he added.

Biden’s proposal, the American Jobs Plan, that was unveiled Wednesday afternoon in Pittsburgh, Pa. would be partially funded by boosting the corporate tax rate from 21 percent to 28 percent and global minimum tax from about 13 percent to 21 percent, measures that reverse Trump’s 2017 tax cuts. The plan calls for roughly $2 trillion in spending over the course of eight years, with the tax hikes covering the cost over a fifteen-year period.

“Joe Biden’s radical plan to implement the largest tax hike in American history is a massive giveaway to China, and many other countries, that will send thousands of factories, millions of jobs, and trillions of dollars to these competitive nations,” Trump said. “The Biden plan will crush American workers and decimate U.S. manufacturing, while giving special tax privileges to outsourcers, foreign and giant multinational corporations.”

Trump has also been an outspoken critic of Biden and his administration, especially relating to the president’s handling of the crisis at the southern border.

“Joe Biden’s cruel and heartless attack on the American Dream must never be allowed to become Federal law. Just like our southern border went from best to worst, and is now in shambles, our economy will be destroyed!” Trump said this week.

It’s common, however, that past presidents tend to be critical of their predecessors.

“It is a common misunderstanding or perhaps even politically motivated when others claim that past presidents don’t comment or criticize current ones, or their legislation,” Pete Hatemi, a political scientist at Pennsylvania State University, said. “Taft, Roosevelt, Ford, Carter, Clinton, Bush, Obama, and now Trump have certainly criticized their successors' policies or person, directly or indirectly.”

Hatemi added, “I suspect, if we look closely enough, we will find others as well. Trump is perhaps unique in two ways—not in that he criticizes past presidents, but rather the frequency which he does so, and also in the number of past presidents who have been critical of him, which number at least three and perhaps four.”

Biden’s infrastructure and jobs plan pumps trillions of dollars into repairing damaged bridges and roads, expanding broadband access and investing in climate-friendly technologies, among other provisions. The White House’s proposal will now need to be considered and approved by Congress, but Biden will likely see pushback from Republicans over his efforts to raise taxes on corporations.

“Biden and [Congress] are counting on the wide popularity of repairing our aged infrastructure. Every American has had to deal with dilapidated bridges and unsafe roads that resemble what we would expect to see in the poorest of countries, non-existent public transportation and a communication infrastructure from the 1950s, all while our challengers tout modern railways, buildings, and national high-speed internet,” Hatemi said.

Hatemi added, “Doing something that Trump and [Congress] failed to act on, on an issue that almost every American agrees that something needs to be done—well that’s a winning issue. But Biden’s proposal goes beyond roads and speaks to issues of the working class—such as bringing back U.S. manufacturing, investing in 5G, and most importantly, creating jobs. If he stays focused on the center, plays it right and is willing to work across the aisle, it is possible that Biden may even have some Republican support. If he tries to go it alone, he may likely succeed given its popularity.”

The Biden plan, as well as the Democratic leadership plan, is to pass the big-spending measure using budget reconciliation if Republicans refuse to back the effort.