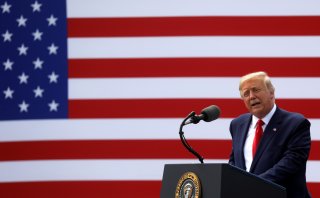 Just a few months ago, President Donald Trump faced questions about his physical health as videos swarmed social media of him gingerly walking down a ramp while visiting the U.S. Military Academy at West Point. During the president’s speech, Trump was also seen having difficulty holding a glass of water with his right hand, as he brought it to his mouth, but seemed to need his left hand to guide the bottom of the glass, so he could finally get a sip of water.

Back in November 2019, Trump—who would become the oldest man ever to be president for a second term if elected—made an unscheduled visit to Walter Reed, where the White House claimed at the time that Trump had completed portions of his annual physical exam, as he had some extra time. The president echoed his administration’s statements, noting he “began phase one of my yearly physical” that he “will complete next year.”

The explanation from November, however, contrasts his reasoning for the visit that he said Tuesday.

“The reason for the visit to Walter Reed, together with the full press pool, was to complete my yearly physical,” Trump tweeted. The president also denied that he had “mini-strokes” around the time of his trip to the hospital, after critics took to Twitter about the president having a stroke and when a New York Times correspondent claimed Vice President Mike Pence was temporarily put on standby in the event the president had to be anesthetized.

Michael Schmidt, the correspondent for the New York Times, said in his new book that Pence was instructed to be put on standby to assume the presidential powers last November during Trump’s visit to Walter Reed in the instance that the president would undergo anesthesia. After learning about Schmidt’s remarks, as well as others about him having a stroke, Trump blasted Twitter and told the White House physician to also release a statement about his health.

"It never ends! Now they are trying to say that your favorite President, me, went to Walter Reed Medical Center, having suffered a series of mini-strokes. Never happened to THIS candidate — FAKE NEWS. Perhaps they are referring to another candidate from another Party!” Trump tweeted Tuesday morning.

The physician to the White House, Sean Conley, released a statement after Trump asked him to.

“President Donald J Trump has asked that I, Dr. Sean Conley, Physician to the President, address the recent public comments regarding his health. I can confirm that President Trump has not experienced nor been evaluated for a cerebrovascular accident (stroke), transient ischemic attack (mini-stroke), or any acute cardiovascular emergencies, as have been incorrectly reported in the media.

“The President remains healthy and I have no concerns about his ability to maintain the rigorous schedule ahead of him. As stated in my last report, I expect him to remain fit to execute the duties of the Presidency.”

Officials noted that Trump welcomed his usual pool of journalists to the visit, where they reported that the president got into his motorcade without needing any help. The officials also said that the president had another physical exam in April, where no eyebrows raised over Trump’s health.

Trump’s campaign also issued a statement attacking Democratic nominee Joe Biden’s health, a tactic he’s frequently used during the election season. The statement dubbed Biden as “somebody who truly has lost a step.” The president has suggested that Biden has a mental disease and has avidly said the former vice president is “on some kind of enhancement,” Trump said on Fox News, to improve his overall health, a remark he’s used against former Secretary of State Hillary Clinton in 2016. Trump challenged Biden to a drug test before the debates begin in September, but the Democratic nominee rejected the request, just as Clinton did.

Biden, 77, would be the oldest man to be elected into the White House in November and has been criticized by Trump for his speaking ability—an obstacle that the former vice president addressed at the Democratic National Convention. Biden admitted to having a strong stutter during his youth and broadcasted a young boy at the convention who also has a speaking disorder that Biden helped him combat.

In an interview with Fox News on Tuesday, Pence was questioned about being on standby last November during the president’s visit, and the vice president responded by saying Trump “is in excellent health.” After clearly dodging the question, the Fox News anchor continued to challenge the vice president’s remarks, and Pence finally said, “I don’t recall being told to be on standby. I was informed that the president had a doctor’s appointment.” He added, “Part of this job is you’re always on standby.”

Judd Deere, a White House spokesman, told the New York Times in a statement Wednesday that “online conspiracy theorists and even some left-wing politicians have irresponsibly speculated that the president is not well—a disgusting assumption that has no basis in fact or reality—and it needs to stop.” Deere’s remarks, however, did not address the president’s change in reasoning for his trip to Walter Reed, as the White House claimed at the time it was to complete parts of his annual checkup.