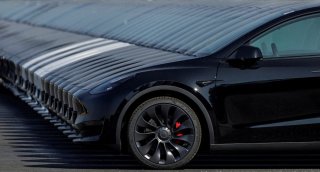 Despite rising gas prices in the United States this year, few have asked whether prices have changed views on electric or hybrid cars or other means to reduce the pain at the pump. Our survey research suggests increased consideration of alternatives, but not a fundamental shift in public perceptions.

Rather than condemn Russia’s invasion of Ukraine for rising prices, economist Connel Fullenkamp argues that the closure of many oil-refining businesses during the pandemic is to blame. Because these companies are so expensive to keep efficient, many owners chose not to reopen, even as demand for oil returns to pre-pandemic levels. Even before the invasion of Ukraine, experts expected prices to reach above $4 per gallon, and while prices have declined in the last month, concerns about gas prices continue.

In addition, the effects of climate change also necessitate shifting to renewable energy. The only means to mitigate global climate change, according to a February 2022 UN report, is to reduce carbon emissions to net zero by about 2050, which would eventually bring the planet back below 1.5°C of warming, the point beyond which some devastating effects of climate change will become irreversible. As UN secretary-general Antonio Guterres said in a statement, “The facts are undeniable … The world’s biggest polluters are guilty of arson of our only home.”

Prior to rising gas prices, we have seen steady increases in alternative energy sources in the United States. Areas that previously relied heavily on non-renewable energy sources are increasing their production of solar projects so rapidly it is difficult for the largest electric grid operator, PJM Interconnection, which serves thirteen states and Washington DC, to keep up. Likewise, a 200-megawatt solar installation is planned in a former coal-mining community in Kentucky that, when completed, will quadruple the state’s solar energy production and employ primarily former coal miners. In 2021, the Biden administration announced a goal of 100 percent carbon-free electricity by 2035, which would mean that electric vehicles (EVs) would be powered on clean energy in contrast to internal combustion engine vehicles. Yet, in order to have a significant effect on the amount of oil consumed, policies need to target consumption in addition to production, a step that we have not yet seen from the Biden administration, likely because it would have intense negative political ramifications.

To understand the ramifications of recent gas prices and its correlation to the American public’s opinion of alternative energy sources, we conducted an original national web survey in the United States from June 29-July 11 via Qualtrics with quota sampling for age, gender, and geographic region. We asked 1,728 Americans: “Has the increase in gas prices caused you to consider any of the following?” 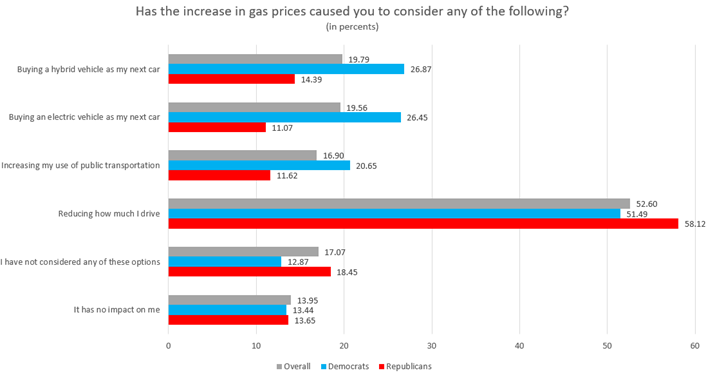 Unsurprisingly, we see majorities stating they have reduced how much they drive, with higher rates among Republicans (58.12 percent) than Democrats (51.49 percent). In contrast, less than 20 percent of respondents overall stated that gas prices have led them to consider buying a hybrid or electric car in the future or to increase use of public transit, with Democrats roughly twice as likely as Republicans to state they considered these options. Admittedly, it is difficult to determine whether those surveyed considered alternative modes of transportation prior to the increase in gas prices. An April 2022 poll found Democrats nearly twice as likely to consider an EV as Republicans. One must also acknowledge that some options may not be viable for all. This may be for various reasons, including the increased upfront costs of hybrids and EVs or due to 45 percent of Americans having no access to public transportation.

While the percentage of those interested in making the switch from an internal combustion engine to an EV might seem low, we have seen clear increases in recent years. For context, a survey in June 2021 found only 7 percent of Americans owned a hybrid or electric vehicle, yet according to a New York Times article this year, Google searches for EVs reached a new record in March 2022, with a 43 percent jump from January to February alone, and a 57 percent jump on Cars.com in February to March as well. Advertisement has also increased, with almost all of the auto ads during the 2022 Superbowl featuring electric vehicles.

Rising gas prices may not have pushed majorities to consider other fuel sources, but this may be a function not of general disinterest in alternatives, but the lack of the right incentives now. A solution to long-term higher oil prices thus requires consideration of America’s geographic diversity and desire for auto ownership. Instead of a one-size-fits-all approach, findings ways to incentivize alternatives that meets one’s immediate needs and capabilities is necessary, one that likely requires additional investment in the infrastructure needed to reduce concerns about EVs and the development of high speed rail (HSR) that reduce the perceived advantages of current combustible-engine cars.

Timothy S. Rich is a Professor of Political Science at Western Kentucky University and Director of the International Public Opinion Lab (IPOL).

Kerby Gilstrap is a recent honors graduate of Western Kentucky University where she earned two BAs in International Affairs and Arabic for International Service.