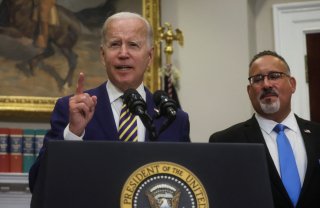 “Courts have issued orders blocking our student debt relief program,” the Education Department said in a statement, adding that it is no longer accepting applications while the Biden administration seeks to overturn the Texas decision.

“As a result, at this time, we are not accepting applications. We are seeking to overturn those orders. If you’ve already applied, we’ll hold your application,” it continued.

The ruling went a step further than a previous federal appeals court order that ordered the Education Department to halt the processing of loan discharges.

Secretary of Education Miguel Cardona confirmed on Friday that the Department of Justice has already appealed the ruling.

“We remain committed to taking other actions to fix longstanding issues in the student loan forgiveness system and hold schools accountable for leaving students with mountains of debt and without the skills and preparation to find good jobs,” he said in a statement.

“We will never stop fighting for the millions of hardworking students and borrowers across the country,” he added.

Roughly 26 million borrowers in total have filled out applications for the program or have been identified as automatically eligible based on income data already on file, according to the Education Department.

Under the student-loan relief plan, those with federal student loans who make under $125,000 annually, or couples earning less than $250,000, qualify for up to $10,000 in forgiveness. But if a borrower received a Pell Grant to attend college, they could potentially get up to $20,000 in relief.

Additionally, the student loan announcement extended the moratorium on repayments until January and created a new income-driven repayment (IDR) plan, which is designed to assist people who have a difficult time making large monthly payments. This will allow borrowers to pay no more than 5 percent of their monthly income on undergraduate loans, a sizeable decrease from the current 10 percent threshold.