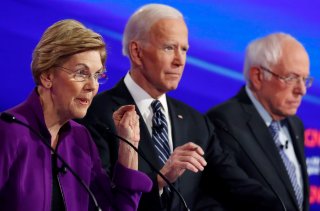 Sen. Elizabeth Warren (D-Mass.) renewed her student loan forgiveness efforts this week, arguing that she and Senate Majority Leader Chuck Schumer (D-N.Y.), another leader in the cancellation fight, “are pushing hard to try to get it done.”

Warren and Schumer have been the kingpins among the Democratic Party to push President Joe Biden to unilaterally cut up to $50,000 in federal student loan debt per borrower. Warren resurfaced the initiative on Thursday as the White House is still undergoing a review of the president’s “legal authority” to implement that large of a student loan cancellation measure.

“This is something the president can do, and Leader Schumer and I are pushing hard to try to get it done,” Warren said during a Washington Post event.

Biden has expressed doubt over his presidential powers to eradicate federal student loan debt to that extent, but he has called on Congress to draft a bill that cancels up to $10,000 in debt per borrower, a policy that Biden echoed on his presidential campaign trail.

Democrats and higher education advocacy groups have urged the White House to swiftly pass a student loan cancellation bill to alleviate a massive financial burden for borrowers who may be struggling from the economic crisis triggered by the coronavirus pandemic. Democrats have also argued that the measure would diminish the disproportionate financial weight on Black and Latino Americans.

Warren referred to canceling debt as “the one thing Joe Biden could do by himself to help close the Black-white wealth gap.”

Warren also echoed her student loan forgiveness push at a Senate subcommittee hearing last month, where she opened the meeting with a striking statistic—36 million out of the 43 million federal student loan borrowers, or 84 percent, would have all of their debt cancelled if the president cut $50,000 in loans per borrower.

The Massachusetts senator, along with other Democrats in the student loan fight, assert that the White House could cancel debt through the Higher Education Act.

Warren’s comments come as White House chief of staff Ron Klain said that Biden has instructed Education Secretary Miguel Cardona to put together a memo on the president’s authority to cut student loan debt through executive action. Once Biden reviews the memo, Klain said that the president would decide whether he would implement such a widespread cancellation measure.

But the inaction has prompted more than 400 community and professional organizations to call on the Biden administration to eradicate student debt. The groups first sent a letter in November and then again in January, which has been since updated with 85 additional signatures.

“Cancelling student debt would disproportionately help borrowers of color, respond to the coronavirus crisis, and provide much needed economic relief and stimulus. We call on you to deliver on the promise of the Biden-Harris Racial Economic Equity plan by cancelling federal student debt by executive action immediately,” the groups wrote. Some of the signers include the American Civil Liberties Union (ACLU), American Federation of Teachers, the National Domestic Violence Hotline and the Sunrise Movement.