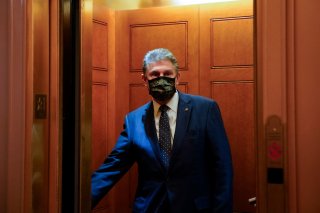 It’s been clear since the end of December that the expanded child tax credit, which passed in March of 2021 and was in place through the end of 2021, doesn’t stand much chance of being revived, at least in its previous form.

Now, according to a crucial senator, the legislation that contained the expanded child tax credit is “dead.” However, that may be more of a matter of semantics.

Sen. Joe Manchin (D-WV) said in a Fox News interview last December that he was a “no” on the Build Back Better package, which had passed in the House of Representatives earlier that month. Build Back Better consisted of several major spending provisions, one of which was a one-year expansion of the credit. While Manchin had been in negotiations with the White House over what he would or wouldn’t support, he ultimately decided to oppose the bill altogether, with subsequent reporting stating that Manchin was specifically opposed to the child tax credit.

This week, as reported by CNN, Manchin was asked by a reporter about the status of Build Back Better negotiations.

"What Build Back Better bill? There is no, I mean, I don't know what you all are talking about,” the senator said. When asked about what may happen with talks, Manchin said, “No, no, no, it's dead.”

Manchin was later asked what he meant, and replied, “If they're talking about the whole big package, that's gone … We'll see what people come with. I don't know.” The senator also indicated that other bills, such as one to fund the government and another to reform the Electoral Count Act, may take precedent.

It remains a possibility that elements of the Build Back Better package that passed the House could be revived in a smaller bill, or perhaps that individual elements could be passed as smaller bills. However, in an evenly divided  Senate, just about any measure that passes would likely need the support of all fifty Democratic senators, including Manchin. And any legislation that passes would likely not be called “Build Back Better.”

A group of Democratic senators wrote a letter last week urging the president not to abandon the idea of the 2021 version of the child tax credit.

"Without the expanded credit, nearly ten million children will be thrown back into or deeper into poverty this winter, increasing the monthly child poverty rate from roughly 12% to at least 17%,” the letter said.

Meanwhile, some commentators have argued for a bipartisan effort to revive the “child allowance” plan introduced by Sen. Mitt Romney (R-UT) back in early 2021. However, it isn’t clear if there’s any interest on the part of the White House or Democratic leadership to go that route.