Experts: Gas Prices Will Only Go Higher this Summer 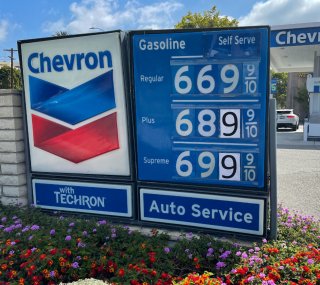 For the first time ever last week, a gallon of regular gas reached and eclipsed $5 on average nationwide, according to AAA data. Unfortunately for American drivers, prices at the pump haven’t dipped below that level since, and more pain could be in store in the weeks ahead.

“It’s been one kink after another this year, and worst of all, demand doesn’t seem to be responding to the surge in gas prices, meaning there is a high probability that prices could go even higher in the weeks ahead,” Patrick De Haan, head of petroleum analysis at GasBuddy, noted in a press release.

“It’s a perfect storm of factors all aligning to create a rare environment of rapid price hikes. The situation could become even worse should there be any unexpected issues at the nation’s refineries or a major hurricane that impacts oil production or refineries this summer,” he added.

Other industry experts are sharing the pessimistic view that gas prices will continue to trek higher in the summer months.

“If we’re going to get U.S. gasoline prices to fall, it’s probably not going to be a supply-driven solution. The solution here, unfortunately, is probably a recession that kills demand and reduces scarcity of supply,” he continued.

However, Tom Kloza, global head of energy analysis at OPIS, has taken the minority stance that gas prices could head lower in the short term.

“We may see the national average slip to less than $5 [per gallon] in coming days,” he told Yahoo. “The market is seeing some demand destruction and it may be that July will be the only month where driving is anywhere close to normal. Don't be surprised to see some slippage in prices this week.”

Meanwhile, in an effort to increase supply and lower gas prices, President Joe Biden has sent out a letter demanding that oil companies explain why they are not putting more fuel on the market as they reap record profits and the average American consumer continues to suffer.

“Since the beginning of the year, refiners' margins for refining gasoline and diesel have tripled, and are currently at their highest levels ever recorded,” Biden wrote on Wednesday to the heads of Exxon Mobil, Chevron, Shell, Phillips 66, BP, and other industry leaders. “I understand that many factors contributed to the business decisions to reduce refinery capacity, which occurred before I took office. But at a time of war, refinery profit margins well above normal being passed directly onto American families are not acceptable.”

Biden also warned that his administration is prepared to take necessary action if oil companies refuse to boost production. “I am prepared to use all tools at my disposal, as appropriate, to address barriers to providing Americans affordable, secure energy supply,” he continued.