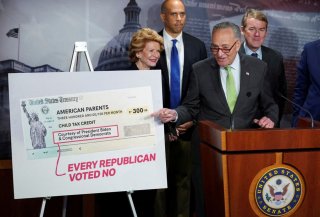 When the American Rescue Plan Act passed Congress in the spring of 2021, it mandated an expanded child tax credit, which included monthly payments from July to December.

Almost immediately after the first month of the credit being available, studies began showing that it had gone a long way towards reducing poverty. In fact, the Center on Poverty and Social Policy at Columbia University issued monthly reports throughout 2021 showing how many children were lifted from poverty due to those payments.

At the end of December, the expanded credit expired after the Biden administration’s Build Back Better spending package, which would have expanded it for one more year, died in the Senate. January passed without that mid-month payment that had arrived for the previous seven months. This week, that happened in February as well.

Now, the Center on Poverty and Social Policy has come out with numbers showing poverty increased in January when the credit expired.

In a press release this past week, the Center stated that the monthly child poverty rate went from 12.1 percent in December 2021 to 17 percent in January 2022, which it described as the highest it has been since the end of 2020. That amounts to “3.7 million more children in poverty due to the expiration of the monthly Child Tax Credit payments,” the Center said, with children of color hit hardest.

“By December, [the expanded child tax credit] was keeping 3.7 million children from poverty and reducing monthly child poverty by 30 percent,” the Center said in its release. “A roundup of the available research reveals that, while in place, the monthly Child Tax Credit payments buffered family finances amidst the continuing pandemic, increased families’ abilities to meet their basic needs, reduced child poverty and food insufficiency, and had no discernable negative effects on parental employment."

The Center also released a policy brief laying out what will happen in 2022.

"Over the next few months, as we enter the 2022 tax season, monthly poverty rates will be impacted by the receipt of annual tax refunds – in particular, the delivery of the second half of the 2021 expanded Child Tax Credit because it will be a larger lump sum overall for many families than in prior years and millions of families are also newly eligible,” the brief said. “Following the conclusion of tax season, however, it is likely that monthly child poverty rates could be persistently high through the rest of 2022 absent the continuation of an expanded Child Tax Credit, further policy interventions, or strong improvements in labor market outcomes.”