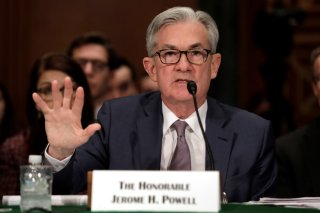 A Federal Reserve Bank of New York survey released earlier this week revealed that inflation fears among Americans remained near a record high in April and will stay elevated in the coming years.

As reported by CNBC, inflation expectations over the next twelve months fell to a median of 6.3 percent, a 0.3 percentage point decrease from the record high in March. In three years, consumers see inflation hitting 3.9 percent—an increase of 0.3 percent from the month before but still below the peak of 4.2 percent registered in late 2020.

The Federal Reserve data were released as year-over-year inflation in March came in at 8.5 percent, the highest level seen since December 1981. The consumer price index for April is due to be reported on Wednesday, with economists expecting it to hit 8.1 percent. “We have our job to do and we have to bring inflation back down,” Minneapolis Federal Reserve Bank President Neel Kashkari told CNBC on Monday.

In an effort to tame the stubbornly high inflation rate, the Federal Reserve has taken a significantly more hawkish approach in recent months. After raising the key interest rate by a quarter of a percentage point in March, the Fed last week lifted the benchmark interest rates by a half percentage point, the largest hike in twenty-two years. Fed officials have signaled that similarly sized increases are on the table at future meetings. Moreover, they have announced plans to shrink the Fed’s $9 trillion asset portfolio beginning next month.

The key benchmark federal funds rate now sits at a range between 0.75 percent and 1 percent, the highest level since the pandemic began more than two years ago. According to the latest data from the CME Group, current market pricing has the rate rising to 2.75 percent to 3 percent by the end of the year.

“Inflation is much too high, and we understand the hardship it is causing, and we are moving expeditiously to bring it back down. We have both the tools we need and the resolve that it will take to restore price stability on behalf of American families and businesses,” Powell told reporters after the central bank’s most recent two-day meeting.

“Assuming that economic and financial conditions evolve in line with expectations, there is a broad sense on the committee that additional fifty basis point increases should be on the table at the next couple of meetings,” he concluded.