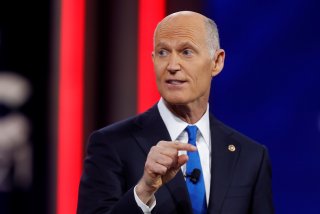 Sen. Rick Scott (R-Fla.), the chairman of the Republican Senatorial Campaign Committee, introduced the  “11-Point Plan to Rescue America” earlier in March. The plan is a detailed agenda that illustrates what Republicans will do if they recapture control of Congress in November.

The plan has been controversial. Sen. Mitch McConnell (R-Ky.), the Senate Minority leader, has expressed his public opposition — while Democrats have seized on some of its specific proposals, including a call for everyone in the country, even the very poor, to pay federal income taxes.

Also controversial has been the plan’s approach to Social Security. While the program is only mentioned briefly, Scott’s document says it would “force Congress to issue a report every year telling the public what they plan to do when Social Security and Medicare go bankrupt.”  In addition, the plan calls for “no government assistance unless you are disabled or aggressively seeking work.” It also calls for all legislation to sunset after five years, requiring Congress to pass laws again if they are considered to be worth keeping.

“We will not have as part of our agenda a bill that raises taxes on half the American people and sunsets Social Security and Medicare within five years,” McConnell said last week. “That will not be part of the Republican Senate majority agenda.”

A few days after defending the Social Security language in a Wall Street Journal op-ed, Scott appeared Sunday on Fox News Sunday. According to a transcript, host John Roberts asked how Scott could make such proposals in an election year, and Scott answered that those were “Democrat talking points.”

“The urgency to act on Social Security is clear,” the Congressman wrote. "The elderly are not only the most susceptible to this pandemic; since they are on fixed incomes, they are also the most susceptible to inflation. They need help and they need it now. It has been more than 50 years since Congress enhanced Social Security benefits and 39 years since it strengthened the program.”