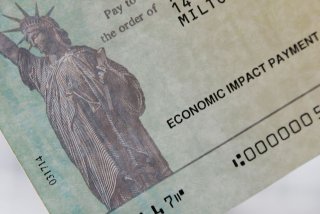 There is a high likelihood that the Internal Revenue Service only has a few more batches of coronavirus stimulus checks left to disburse for this current third round of payments under President Joe Biden’s American Rescue Plan.

And as millions of Americans are still suffering economically due to the ongoing pandemic, there have been increasing calls in Washington and among everyday citizens to quickly approve another round or two of direct cash payments.

Know that there is one particular Change.org petition that’s taking that even a step further by demanding recurring monthly checks until the health crisis ends.

Launched by Colorado restaurant owner Stephanie Bonin, the petition has already garnered more than 2.3 million signatures and is well on its way to achieving its goal of eventually hitting three million.

“I’m calling on Congress to support families with a $2,000 payment for adults and a $1,000 payment for kids immediately, and continuing regular checks for the duration of the crisis. Otherwise, laid-off workers, furloughed workers, the self-employed, and workers dealing with reduced hours will struggle to pay their rent or put food on the table,” the petition states.

“Our country is still deeply struggling. The recovery hasn’t reached many Americans—the true unemployment rate for low-wage workers is estimated at over 20 percent and many people face large debts from last year for things like utilities, rent and child care. These are all reasons that checks need to be targeted to people who are still struggling and that Congress needs to learn from this past year. … Moving forward Congress needs to make recurring checks automatic if certain triggers are met,” it continues.

Bonin added that unemployment checks alone aren’t enough to assist many Americans pay for their basic everyday needs. This situation also comes against a backdrop in which half of all states are ending the $300 enhanced federal unemployment benefits.

“For our team and other Americans who can claim unemployment, even the maximum payments will not be enough for most people to continue paying their bills—and avoid slipping into poverty. The facts are, even successful small businesses can’t go months with their doors closed. But supplying Americans with monthly support until they can get back on their feet can save our communities from financial ruin,” the petition contends.

It also appears that some Washington lawmakers are finally listening to the demands of these financially wounded Americans.

“The pandemic has served as a stark reminder that families and workers need certainty in a crisis,” members of the House Ways and Means Committee recently wrote in a letter that called for recurring direct payments in Biden’s highly ambitious American Families Plan.