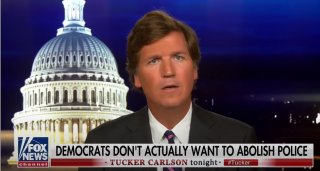 With the elections less than four months away and buzz that President Donald Trump might lose his reelection bid, Republican strategists and commentators are looking to see who will be the next frontrunner for the 2024 elections.

Tucker Carlson, host of Fox News’s “Tucker Carlson Tonight,” is a prominent, outspoken figure in the party, especially during Trump’s presidency, and is rumored to be a potential Republican candidate in the next four years.

Carlson’s show, according to the second quarter television ratings released in late June, is the most-watched cable news program in history. It is also one of the most-watched shows in its time slot.

“Tucker, I think, has done an amazing job of galvanizing an audience. He’s the highest-rated talk show host, and I think he’s been very coherent on issues like BLM [Black Lives Matter] and Covid in ways that other talk show hosts have been a little less forceful,” John Feehery, columnist, and American political communications strategist, said. “That is something that is very appreciated by the Republican, Conservative Trump base.”

Feehery also was the former press secretary to Republican representative of Illinois, Dennis J. Hastert, during his term as speaker of the House.

Over the last few months, there have been murmurs about other substantial Republicans running for president post-Trump but none really echo the “Trumpism” ideology that the current president has worked to establish.

Feehery said Carlson’s candidacy would be a “continuation of what Donald Trump has started, you know, become much more populous, anti-establishment party.”

On the show, Carlson advocates anti-immigration, anti-free trade, populism and America First economics that Trump supporters value. However, the Fox News show host has outwardly bashed Trump for not fully embracing “Trumpism” as he promised at the beginning of his presidential term.

Republican strategists say that Carlson’s days in front of the camera could be both good and bad for his presidential campaign.

“It’s easy to get notoriety and get fundraising because people know you. But, sometimes it’s more difficult to establish, kind of, a political operation. I think the other difficulty about being a TV host, or commentator is that you have a history of saying things that are provocative on purpose, and that usually can be used against you,” Feehery said.

“His opponents would have a field day in one way because he says so much. But, on the other hand, he’s very well known as a result of that,” Andrew Natsios, former administrator of the US Agency for International Development (USAID) under the George W. Bush administration and current professor at the Bush School at Texas A&M University, said.

Despite being articulate and well-branded in the Republican party, Carlson has had a history of losing notable advertisers because of his “provocative” language. In early June, Carlson attacked the Black Lives Matter movement, condemning the protests and destructive uproar that occurred following the killing of George Floyd.

“This may be a lot of things, this moment we are living through. But it is definitely not about black lives, and remember that when they come for you. And at this rate, they will,” Carlson said.

Fox News said, however, that “Tucker’s warning about ‘when they come for you’ was clearly referring to Democratic leaders and politicians.”

Prior to working at Fox, Carlson was a CNN commentator from 2000 to 2005 and a print journalist at the start of his career at The Weekly Standard, a now-closed neoconservative magazine.

“To me, even though he’s very well known, he’s not known at all,” Natsios said “We know very little about his personal weaknesses and [strengths], character, his values, integrity, self-awareness and how he acts under pressure or in a crisis. One’s political views change, one’s character does not.”