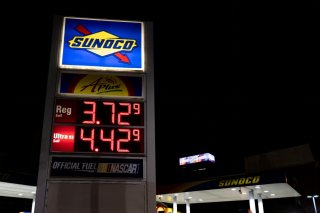 The average gas price in the United States, reached record highs of over $5 earlier this year, then declined every day for three months.

Now, however, that streak is over.

According to CNN, the average gas price rose by a penny on Wednesday to $3.68 a gallon, ending the streak of 98 straight days of dropping prices. It represented the first day of rising prices since mid-June when gas was over $5; the streak was the longest of its kind since 2005.

“All streaks have to end at some point, and the national average for a gallon of gas has fallen $1.34 since its peak in mid-June,” Andrew Gross, AAA spokesperson, said in a blog post. “But there are big factors tugging on global oil prices—war, COVID, economic recession, and hurricane season. All this uncertainty could push oil prices higher, likely resulting in slightly higher pump prices.”

AAA attributed the months of falling prices to several factors, including stronger supply, weaker demand, an oil price drop attached to fears of global recession, the strong dollar, better-than-expected oil flows from Russia, and the continued tapping of the Strategic Petroleum Reserve.

“I don’t think you’ll see a major move higher or lower,” Tom Kloza, global head of energy analysis for OPIS, said in the AAA post. “Crude has no speculative investment money behind it right now.”

“We are poised to see the national average break the 14-week streak of decline as several significant but temporary refinery issues push #gasprices higher in several regions,” De Haan said. “As *always* #gasprices react to changes in supply & demand. For now, a much higher than normal amount of unexpected refinery issues & maintenance that starts after summer is having a significant impact, or will, on prices. Prepare for prices to temporarily rise until sorted out.”

“The market is going to start pricing that in, and refiners are not going to be getting this cheap oil from the reserve,” Phil Flynn, an analyst with Price Futures Group, told the newspaper this week. “The odds are we’ll see a significant price spike of oil come winter.”

The question remains of what effect gas prices will have on the midterm elections this year.

“Every time prices go down they are taking a victory lap, even though prices are substantially higher than they were when they took office,” Flynn, the analyst, said of the Biden Administration.