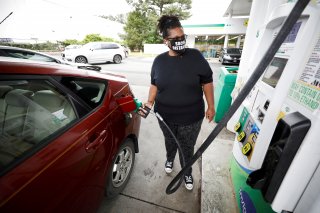 Gas prices in the United States show no signs of dropping. Once again, the rising price of oil worldwide has sent prices at the pump higher.

While gas prices typically drop from the summer to the fall, that hasn’t been the case this year. In fact, the opposite has been true. This represents the period with the highest gas prices since 2014. And it doesn’t appear there’s much of a light at the end of the tunnel.

“The national average closed the week by climbing to yet another fresh seven-year high, as the price of oil continues to drag gas prices along for the wild ride, leaving motorists on empty,” Patrick De Haan, head of petroleum analysis for GasBuddy, said in a blog post this week.

Not only has supply been affected, but demand has risen as well, going up 2.22 percent week over week, per GasBuddy.

“With OPEC holding back oil production and strong global oil demand, the situation will no doubt pave the road with even higher gas prices in the weeks ahead,” De Haan said in the blog post. “Until several bottlenecks ease, including supply chains and low global inventories of oil, natural gas and coal, we’ll be stuck feeling the pinch of rising oil and gasoline prices. The bad news is that for now, all I see is the upward trend at the pump continuing into the weeks ahead with no sign of relief just yet.”

The site also said that the most common gas price was $3.09 per gallon, while the median price is $3.19 per gallon.

AAA, meanwhile, had the average gas price even higher, at $3.32 a gallon, the organization said in a blog post titled Sorry Folks, But the Cost of Gasoline is Still Going Up.

“Compared to the price of gas a year ago, it now costs consumers about $17 more to fill up their vehicles,”  Andrew Gross, an AAA spokesperson, said in the post. “That’s the cost of a large pizza with toppings. And unfortunately, it doesn’t look like drivers will be finding relief at the pump any time soon.”

“Typically, softening demand should result in some easing of pump prices, but the higher cost for crude is blocking this. With oil prices remaining elevated, pump prices will follow suit because the cost of crude oil accounts for more than half of the price of each gallon of gas,” AAA added in the blog post.