Gas Prices Fall Below $3 in Some U.S. States 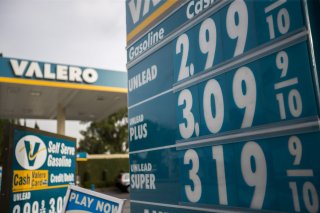 Gas prices have not only declined once again but gas below $3 has returned in some parts of the country.

As of Monday, per GasBuddy, the average gas price in the United States has dropped to $3.67 per gallon. That’s another drop of 7.6 cents from the same period the week earlier, and down 26.9 cents from the month before.

“We continue to see the national average price of gasoline decline, now for the thirteenth straight week. But, we’re seeing drastically different price behaviors from coast to coast, with some areas seeing noticeable increases while others are seeing decreases,” Patrick De Haan, head of petroleum analysis at GasBuddy, said in the blog post.

He also laid out why.

“Refinery issues in California are leading to increases in areas supplied by the state’s refineries, including areas of Arizona, Nevada, Oregon, Washington and of course, California. Gasoline supply remains tight for the East Coast with some modest moves up, while prices continue to edge lower in the Plains, South and areas of the Great Lakes. For now, I believe the drop in prices will overpower the increases, leading to potentially another decline this week, but we’re in a very fragile time and certainly could see a broader move higher in the weeks ahead.”

DeHaan said on Twitter Tuesday that thirteen cities in the United States have average gas prices under $3 a gallon, all of them in the south or southeast. They include Warner Robins, Dalton and Albany in Georgia, and McAllen, Brownsville, Monroe, Abilene and San Angelo in Texas.

The most common gas price in the country is $3.39 per gallon, a drop from the week before, GasBuddy said.

AAA also reported a drop in its own weekly report.

Per CNBC, a survey issued by the New York Federal Reserve, the August Survey of Consumer Expectations, saw expectations lower for inflation.

“Median one- and three-year-ahead inflation expectations both posted steep declines in August, from 6.2 percent and 3.2 percent in July to 5.7 percent and 2.8 percent, respectively,” the Fed survey said.

“Median five-year-ahead inflation expectations, which have been elicited in the monthly SCE core survey on an ad-hoc basis since the beginning of this year and were first published in July, also declined to 2.0 percent from 2.3 percent. Expectations about year-ahead price increases for gas also continued to decline, with households now expecting gas prices to be roughly unchanged a year from now.