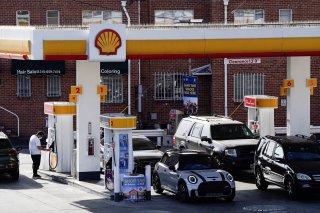 Los Angeles has become the first major city in the United States to reach an average gas price of $6, according to GasBuddy.

On Tuesday, the average price for a gallon of regular gas there hit a record $6.011 even as the average gas price nationwide continued to decline slightly from the all-time high earlier this month.

Los Angeles reached an average of $5 per gallon just a few weeks ago.

“In less than three weeks, the average price of gasoline in Los Angeles has surged by an average of $1 per gallon, blowing past $5 and now reaching $6 per gallon on refinery issues and Russia’s war on Ukraine,” De Haan said in a press release. “While I’m hopeful we won’t go much beyond this, there’s not much light at the end of the tunnel for now.”

GasBuddy noted that “this milestone was reached largely due to rebounding oil prices because of the ongoing Russian war in Ukraine but recent refinery kinks in Southern California amidst a rise in seasonal demand has pushed Los Angeles over the top.”

California is generally known to have some of the highest gas prices nationwide due to high gas taxes and its cap and trade program which assesses a premium based on vehicle emissions. California’s average gas price is currently $5.88 per gallon, according to AAA.

Due to the high gas prices, the state’s lawmakers increasingly have been under pressure to offer some financial relief to residents. California Democrats recently unveiled a new proposal that would provide a $400 rebate to every taxpayer in the state whether they own a vehicle or not.

“This proposed $400 rebate would cover the current 51 cents-per-gallon gas tax for one full year, 52 trips to the pump for most vehicles,” the lawmakers wrote in a letter addressed to Gov. Gavin Newsom, according to Fox Business.

“Notably, we believe a rebate is a better approach than suspending the gas tax—which would severely impact funding for important transportation projects and offers no guarantee that oil companies would pass on the savings to consumers,” the letter said.

Rebate Not Only for Fuel

Lawmakers added that the rebate doesn’t just have to be used on gas. It could also pay for other basic necessities like food and utilities, which also have been hard hit by high inflation.

“We know too many Californians are struggling to make ends meet right now,” said Assemblywoman Cottie Petrie-Norris (D-Irvine), according to KCRA in Sacramento. “We are here to offer help we are here to deliver solutions.”