With Gas Prices at Record Highs, Would Keystone XL Have Made a Difference? 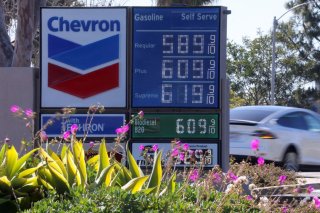 On Monday, average gas prices in the United States officially reached their highest level in history, with GasBuddy confirming that the new average of $4.104 a gallon had topped the previous record. The prices had gotten so high, in fact, that GasBuddy’s website was down for a time on Monday.

“Americans have never seen gasoline prices this high, nor have we seen the pace of increases so fast and furious. That combination makes this situation all the more remarkable and intense, with crippling sanctions on Russia curbing their flow of oil, leading to the massive spike in the price of all fuels: gasoline, diesel, jet fuel and more,” Patrick De Haan, head of petroleum analysis at GasBuddy, said in a blog post Monday, calling it a “dire situation.”

The reason for the spike in recent days is Russia’s invasion of Ukraine and the resulting sanctions, as well as uncertainty about the future, all of which have constrained supply and sent prices rising around the world. For much of 2021, prices had risen due to a combination of pandemic-era demand rising and OPEC+ not increasing production.

As has often been the case when gas prices rise, a lot of people are blaming President Joe Biden. This previously happened during gas price spikes during the Bush and Obama administrations and before that during the oil embargo days of the 1970s. In this case, many of Biden’s opponents have argued that the United States was “energy-independent” during the Trump administration, but that Biden has ruined that, in part due to his decision in the opening days of his presidency to cancel the Keystone XL pipeline.

The truth is a bit more complicated than that. For one thing, presidents do not control gas prices, and the forces that determine prices at the pump—the global price of oil, the actions of OPEC, and wars and natural disasters that disrupt supply—are usually mostly or completely out of the control of presidents.

And when oil prices hit historic lows, it’s usually because of some calamity, usually something involving bad news for the economy. When average gas prices fell towards the $2 mark in the summer of 2020, for instance, it wasn’t a sign that things were going great. It was because the pandemic was in its opening months, the economy was cratering, very few cars were on the road, and demand had collapsed. Gas prices also collapsed after the housing bubble burst in 2008.

In a commentary published last week,CNBC’s Ron Insana provided a more accurate explanation of what happened in the oil markets the last few years.

Starting around 2014, Saudi Arabia began to “flood the world market” with oil, causing the price of oil to nearly halve as a reaction to the fracking boom in the United States. Russia also increased its output.

“The U.S. was effectively in control of global energy supplies, supplanting Saudi Arabia as the world’s largest oil producer and Russia as the world’s largest producer of natural gas,” the CNBC report said. “Eventually, however, the combined surge of U.S., Saudi and Russian output led to a collapse in prices that would be further exacerbated by the emergence of Covid.”

This led the oil market towards the bottom, even at one point bringing the oil futures market below $0 per barrel, in April of 2020. This led to the end of the fracking boom, as drilling projects were canceled.

The price spike followed, while the United States has, in fact, been increasing oil production so far in the Biden presidency. But the Keystone XL pipeline, which was not yet built at the time that Biden canceled it, and would not have been anywhere close to fully operational for years, even if the Biden administration had approved it last year, would not have made any difference to gas prices now.

But was the United States really “energy-independent” under Trump? Per a Politifact analysis, that’s something of a complicated question, which hinges on what the definition is of “energy-independent.” If that means domestic production outpaced domestic consumption, that was true in some months during Trump’s presidency but not others. If it meant that the United States was completely free of any foreign energy, that has never been true at any time.

“If one wants to be true to the facts and to history, blame the Saudis and the Russians for the decline in U.S. output, not the cancellation of a single project that, in the overall scheme of energy production, is a rounding error,” Insana said in the CNBC commentary. “There is no doubt that current events, as they have since the 1970s, require a coherent national energy policy that strips the power away from America’s enemies and puts our nation entirely in control of its energy future.”