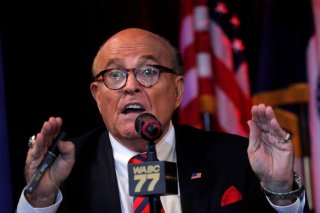 As part of an ongoing investigation into former President Donald Trump’s potential criminal interference in the 2020 presidential election, a Georgia special grand jury on Tuesday issued subpoenas for Sen. Lindsey Graham (R-SC), attorney Rudy Giuliani, and other members of the Trump campaign’s legal team, according to a new Washington Post report.

A twenty-three-person grand jury has been meeting since last May to determine what, if any, state laws were broken in the months-long attempt to undo President Joe Biden’s roughly 12,000-vote election victory. The subpoenas, approved by Fulton County Superior Court Judge Robert McBurney, seek testimony from Graham regarding at least two phone calls he had with Georgia secretary of state Brad Raffensperger and his staff, according to a certificate to secure an out-of-state witness.

During the calls, Georgia officials believe Graham “questioned Secretary Raffensperger and his staff about reexamining certain absentee ballots cast in Georgia in order to explore the possibility of a more favorable outcome for former President Donald Trump,” according to the certificate. It also states that Graham “possesses unique knowledge” of the calls, “the circumstances surrounding his decision to make the calls,” and the logistics of setting them up.

Meanwhile, a copy of the subpoena to Giuliani noted that he appeared before the Georgia state Senate on December 3, 2020, and provided testimony, witnesses, and documentary evidence “purporting to demonstrate the existence of election fraud in multiple Georgia counties.”

“Despite [lack of evidence], the Witness made additional statements, both to the public and in subsequent legislative hearings, claiming widespread voter fraud in Georgia during the November 2020 election and using the now-debunked State Farm Video in support of those statements,” the subpoena said.

Giuliani had submitted a video to lawmakers alleging that poll workers were able to produce “suitcases” full of illegal ballots during the count at Atlanta’s State Farm Arena. The suitcases, though, were actually boxes normally used to store ballots, election officials said.

The subpoena also stated that Giuliani “possesses unique knowledge concerning communications between himself, former President Trump, the Trump Campaign, and other known and unknown individuals involved in the multi-state, coordinated efforts to influence the results of the November 2020 election in Georgia and elsewhere.”

In a statement to National Public Radio, Giuliani's lawyer Robert Costello said that “we have not been served with any subpoena, so we have no current comment.”