The Ghost of Donald Trump Will Haunt Us For Years 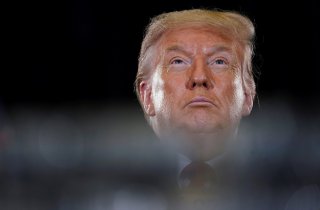 Eventually, the Trump era will end. Although it is difficult to imagine amid our various national crises, there soon will come a day when Donald Trump tweets from the golf course rather than the Oval Office. Whether brought about by democratic action at the ballot box or presidential obesity, inactivity and well-done steaks, the end is coming. And when it arrives, our diplomacy will be stronger than it was before this president took office.

That may seem like a strange statement, for the damage this president has done to our diplomacy while in office has been substantial. The books written about this administration, whether by journalists or administration veterans, could not be more consistent: Trump has effectively destroyed America’s ability to conduct grand strategy. He has no ability to stay on message, removing any possibility of policy consistency. He sees no value in diplomatic tradition or protocols and will hurl insults at world leaders if they fail to see things his way. Trump has reduced interstate relations to the interpersonal, believing that if he gets along with a leader, then so too does the United States. Rebuilding trust in the United States will not be easy. The Trump administration has reneged on so many commitments and destroyed so many treaties that it is unclear why anyone would accept Washington’s word again. But while other countries may not believe the United States, they will not have the option of ignoring it.

When he finally goes away, as relations slowly return to normal, Trump’s many liabilities will become assets for U.S. diplomats. His specter will hover over all future interactions. Our representatives will hardly need to remind their counterparts of the horrors of this era, and of the very real possibility of their return. The potential for a Trump 2.0, and perhaps one not quite so remarkably incompetent, will always exist. The unseemly populist-nationalism that lurks right under the surface of American politics can re-emerge, conceivably doing even more damage to the system if run by a sophisticated operator.

Those sitting across the negotiating table from U.S. diplomats will have to wonder whether a hardline approach to U.S. initiatives would strengthen the know-nothings. Perhaps a concession here or capitulation there would better serve their true long-term interests. Avoiding a second coming of Trump will sit atop their shortlist of national priorities.

Former Pakistani leader Pervez Mussharaf played a similar card adroitly throughout the immediate post–9/11 years.  He could not be pushed hard, he warned the Bush administration, because his support was thin and his domestic enemies perpetually gathering. If seen to be aiding the United States, then he would soon topple, and what came next would be infinitely worse.  The Islamists in his midst would surely gain from any U.S. attempt to pressure him, or any diminution of the annual aid payments, or any such insult. Après moi le deluge, he probably never said, but the meaning was nonetheless clearly communicated:  After me, the flood.

Visions of Trump will haunt all interaction with the United States as long as there are people alive who remember him. Other leaders will need to focus squarely on how their actions affect American politics and will seek to avoid giving any aid or rhetorical ammunition to wannabe Trumps, those inevitable copycats who appeal to the same voters who brought him to power.  Thus in the long run Trump may do something he was never able to do while in office: help his country receive more cooperation and achieve its initiatives. Fear of a repeat may well be a tool that sagacious U.S. negotiators can use to their advantage, because everyone will know that, even in the best of times, the American people might choose the worst among them to lead.

For now, the Foreign Service is on permanent damage-control duty, walking a fine line between apologizing for their boss and remaining loyal. Today, everyone knows this is temporary; tomorrow, everyone will know that Trumpism could return. Other countries will have to decide how to deal with a United States that has this dark underbelly, one that can come to power any fourth November. We will have shown the world our ugly side, and unless they want to see it again, they should listen to what we say.

Christopher J. Fettweis is a professor of political science at Tulane University in New Orleans.  He is the author of five books and many articles about U.S. foreign policy, and is currently working on a project examining the grand strategy of history’s dominant powers.