Go, Joe: The Eviction Moratorium Is Back on for Now 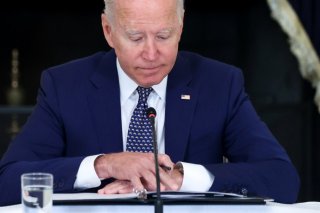 The CDC’s year-long eviction moratorium briefly came to an end on Sunday, August 1, following the expiration of the original measure on July 31. However, following protests from housing activists worried about a surge of evictions, and health officials fearing a coronavirus spike caused by homeless Americans, the CDC announced the approval of a new moratorium on Tuesday, August 3. This moratorium, scheduled to last until October, affects high-risk coronavirus areas and covers much of the United States. The Biden administration’s decision to restore it was largely at the behest of housing advocates and a significant factor was said to have been the advocacy of House Speaker Nancy Pelosi (D-Calif.), who argued in favor of defending renters.

The moral case for the moratorium is clear. More than six million Americans owe back rent, many of whose incomes were seriously affected by the coronavirus pandemic. With the spread of the highly infectious delta variant, infection rates are again on the rise after a months-long lull, and keeping Americans indoors will undoubtedly help to keep infection rates down.

However, there are serious constitutional questions regarding the government’s ability to forbid landowners from evicting their residents. The original moratorium, which took effect in September 2020 and was repeatedly extended until its July expiration, was attacked by landlords as unconstitutional, and landlord advocacy groups emphasized that, in the absence of the threat of eviction, many tenants refused to pay rent or follow established rules.

During this time, many landlords, who were still obliged to pay housing-related bills such as utility costs and property taxes, also suffered financially. They were unable to recoup these costs by charging tenants.

The Supreme Court cautioned the Biden administration in June, warning that the CDC had “exceeded its statutory authority” by issuing the open-ended moratorium and forbidding is renewal unless the CDC could show “clear and specific congressional authorization.” Four of the Supreme Court justices supported immediately striking down the moratorium as unconstitutional. Associate Justice Brett Kavanaugh, an unlikely swing vote, indicated his concern with its legality but allowed it to run until its pre-scheduled expiration—allowing states more time to distribute pandemic-related aid to tenants. This includes roughly $47 billion in federal funds.

The CDC’s announcement on Tuesday attempted to reframe the moratorium around specific areas experiencing high rates of transmission. However, this metric qualifies 80 percent of counties in the United States for coverage under the moratorium, meaning that it is still substantially the same law. For this reason, most observers predict that the Supreme Court will strike the measure down, and evictions will once again resume in the coming weeks.