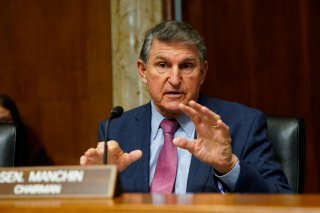 On Tuesday, the White House held a “day of action” related to the expanded child tax credit, the provision of the American Rescue Plan Act that included direct payments to American families, with the rest of the credit arriving at tax time in 2022. The Day of Action, led by Vice President Kamala Harris, was mostly geared towards getting people to file their taxes in order to collect the rest of the credit. It included the launch of a new ChildTaxCredit.gov website.

The direct-checks part of the American Rescue Plan Act expired at the end of 2021, and efforts by the White House to continue the direct payments petered out when the Build Back Better legislation, which would have extended them by one year, stalled out in the Senate at the end of last year.

However, on that Day of Action, some Democrats in the Senate said that they haven’t given up on the expanded child tax credit surviving after all.

While Sen. Joe Manchin (D-WV) declared his opposition to the House version of Build Back Better and has been critical of that iteration of the child tax credit provision, one senator has hope that Manchin can be persuaded to ultimately vote for it.

“Senator Manchin has not slammed the door on this,” Sen. Bennet told NBC News Tuesday, during the Day of Action.

“We know over the last six months that people have spent the money the way we said they were going to spend the money, which was to buy groceries, to pay for rent, really importantly to pay for child care so they could stay at work.”

Manchin, HuffPost reported in December, had expressed concern to colleagues during the talks that poorer Americans would spend the child tax credit money on drugs, rather than providing for their children.

The West Virginia senator has stated that he would like to see both a work requirement and income limit on any child tax credit expansion in order for him to support it.

“It’s interesting to me in these policy arguments the double standard that gets put forward and no one even challenges it,” he said. “What are the work requirements for the tax cuts given to the richest of the rich in 2017? Where are those work requirements?”

Manchin, on the same day, told the press that he is “not a part of any organized discussions” related to the child tax credit. It remains possible, however, that some version of the Build Back Better framework passes with Manchin’s support, with the child tax credit perhaps waiting for a different legislative package at another time.