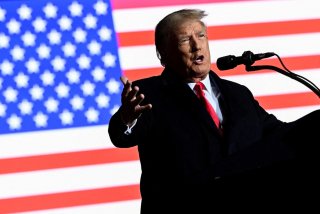 If November 8, 2022, marked an early contest in the 2024 Republican presidential primary, it’s clear who won.

The actual competition formally started the weekend before the midterm election, when former President Donald Trump abandoned his “punch back” policy to draw first blood against Florida Gov. Ron DeSantis—calling him “Ron DeSanctimonious” at a Pennsylvania rally.

Before the returns were in, Trump said on Election Day of DeSantis, “I would tell you things about him that won’t be very flattering — I know more about him than anybody — other than, perhaps, his wife.”

A day after the smashing DeSantis triumph, Trump posted on Truth Social: “Now that the election in Florida is over, and everything went quite well, shouldn’t it be said that in 2020, I got 1.1 million more votes in Florida than Ron D got this year, 5.7 million to 4.6 million? Just asking?”

Importantly, turnout in presidential races is always higher than in non-presidential years, so it’s not surprising more votes were cast in 2020 than 2022. More importantly, Trump never carried Florida by double digits.

Impact Social, a firm that measures social media favorability using a sample size of 40,000 self-identified swing voters on social media, found in an analysis measuring Oct. 12 through Nov. 2 (before the election) that DeSantis’s net sentiment on social media rose by eight points after a strong performance in the gubernatorial debate.

Impact Social works for the “Ready for Ron” PAC that is trying to draft DeSantis to run for president in 2024 but doesn’t soft-pedal information. It also noted an increase for Trump as well, as the election drew closer—and noted a net negative reaction among swing voters to DeSantis shipping migrants to Martha’s Vineyard.

Still, the analysis further says, “Some even use the moniker ‘America’s Governor,’” to describe DeSantis. “In essence the DeSantis [gubernatorial] campaign is being noticed by swing voters across America boosting any presidential ambitions he may hold.”

Whether true or not, in the 2016 primary, Trump promoted his attacks on other GOP contenders as "punching back," meaning they attacked him first. It can’t be overlooked how eager Trump seems to be to attack DeSantis out of the gate.

Conservative commentator Steve Deace was likely correct in tweeting: “Trump has our first confirmed case of DeSantis Derangement Syndrome. His obsession with another dude who hasn’t even publicly engaged him is about 15 Dude Code violations.”

DeSantis hasn’t yet engaged Trump and almost certainly will wait for the right timing.

But, if the two face off, it’s fairly clear how DeSantis might respond as the most successful large-state governor in handling the Covid-19 pandemic crisis, at a time when Trump stood with Dr. Anthony Fauci, the increasingly controversial director of the National Institute of Allergies and Infectious Diseases through 2020.

Maybe the real question here is: Who does Trump think this is helping?

Clearly, it’s helping DeSantis. As former president and kingmaker in GOP primaries (with some exceptions), he has been the leader of the party—and almost the presumptive 2024 presidential nominee should he choose to run. Three days before the primary, he elevated DeSantis as being on a par with him.

To be clear, the context was Trump talking about how he out polls DeSantis by about 71 percent to 10 percent. Importantly, Hillary Clinton obliterated Barack Obama in early polls in 2007—based entirely on name recognition.

The midterm elections—with DeSantis surpassing already high expectations in the backdrop of a bad night (despite the expected flipping of the House) could be a game-changer.

In 2016, no one was ready for Trump. The GOP establishment didn't like him—but at the time they didn't care for his chief rival, Texas senator Ted Cruz either.

By contrast, DeSantis galvanizes much of the conservative movement and seems entirely acceptable to the establishment—at least as a means to an end.

Still, to be clear, Trump has big, big advantages over DeSantis. He’s a former president with a solidly loyal following. Also, DeSantis is not quite as charismatic as presidents such as Ronald Reagan, Barack Obama, or Donald Trump were in creating a political movement around themselves.

But Trump’s arrows were poorly timed in the coming just days before the Florida landslide.

DeSantis remains a longshot against Trump, the goliath in any GOP primary. But the fact that the governor’s great election night contrasts significantly with Trump’s lackluster night makes things much closer—particularly as Republican voters are not tired of winning and will place priority on who can best lead the GOP back to the White House.

Fred Lucas, the author of The Myth of Voter Suppression, is the manager of the Investigative Reporting Project at The Daily Signal.