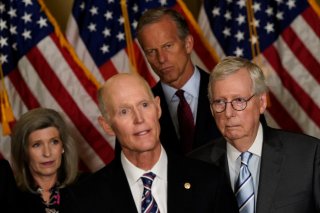 Social Security has often been called “the third rail of American politics.” Then-President George W. Bush used that messaging a lot during his push, early on in his second term in 2005, to partially privatize Social Security and create health savings accounts.

After Bush’s effort crashed and burned, however, Social Security largely retreated as a national political issue, even as annual reports placed the date of the program losing the ability to pay out full benefits. During Donald Trump’s presidency, he did make any potential changes to Social Security a part of his appeal to voters.

That has suddenly changed this year, with Social Security, as well as Medicare, suddenly emerging as an issue in the midterm elections. Republican candidates have repeatedly made comments seeming to question the need for Social Security to continue in its current form. And the Democrats, meanwhile, have sought to make hay of those comments.

Politico this week noticed that phenomenon.

“Getting government out of it, getting government money with strings attached out of it.” Bolduc said of Medicare, which is a government program and always has been. A spokesperson walked back the comments, stating that Bolduc “now opposes privatizing Medicare, Medicaid and Social Security,” but it’s likely that the comments will be used against him by his opponent for the remainder of the campaign.

Candidate J.D. Vance of Ohio had called for privatizing Social Security a decade ago, but now says that he no longer favors doing so.

Another candidate, Arizona GOP Senate nominee Blake Masters, called for Social Security privatization during a candidate forum, while incumbent Sen. Ron Johnson of Wisconsin said earlier this year that he doesn’t believe Social Security should be an automatic part of the federal budget each year, and instead subject to discretionary budgeting.

And Sen. Rick Scott (R-FL), chairman of the Republican Senatorial Campaign Committee, issued a “Plan to Rescue America” earlier this year, which included the provision that would make all legislation sunset after five years. Opponents have interpreted that as a way to put Social Security and Medicare in peril.

The Social Security and Medicare programs are very popular, especially among crucial older voters. Therefore, Democrats, especially the ones who are running against candidates who have made such statements.

Indeed, Politico viewed a focus group by the anti-Trump group known as the Republican Accountability Project, in which “two of the nine Arizona voters participating — each of whom voted for Trump in 2016 but not in 2020 — brought up Masters’ views on Social Security.” Both of those men said that they plan to vote for the Democratic candidate Sen. Mark Kelly (D-AZ) over Masters, despite supporting Trump two years earlier.