Help, Joe Biden: Is There Any Chance for a 4th Stimulus Check? 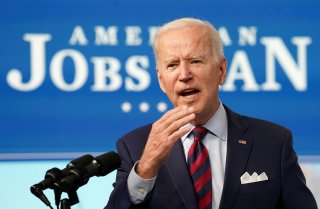 If the highly contentious Build Back Better bill already had been approved, thirty-six million American families could be looking forward to their monthly payments from the enhanced child tax credit—which are seen by many as an unofficial version of the highly sought-after fourth stimulus check.

Green-lighted via President Joe Biden’s American Rescue Plan last March, these enhanced credits provided eligible parents as much as $3,600 for a child under the age of six and up to $3,000 for children between ages six and seventeen. Broken down, this all meant that a $250 or a $300 payment for each child was disbursed to parents each month.

However, without Build Back Better, which would have tacked on twelve more months of the enhanced credits, it appears that millions of cash-strapped families are left to fend for themselves amid the Omicron wave and red-hot high inflationary environment.

“My husband has the only paycheck in the family. We definitely relied on the CTC a lot,” Jen Cousins, a mother of four residing in Orlando, Florida, told National Public Radio.

“Everything is expensive. Inflation is so high. With six people in a family, there’s always something that comes up. Somebody gets sick; someone has to go to the doctor. We’re at the same paycheck level but the cost of everything keeps going up,” she continues.

It’s indeed a common story that has been brought to light by news outlets all across the country, but it has done little to sway West Virginia Democratic Senator Joe Manchin, whose vote is key in an evenly split Senate. He has asserted for weeks that extending the enhanced credits would only discourage people from working and that additional federal spending would only further fuel current inflationary pressures.

Late last week, however, Manchin indicated an openness to reviving negotiations with the Biden administration.

“We’ll be talking to everybody who wants to talk,” he told reporters before leaving the Capitol. “We’ll just be starting from scratch.”

Previously, Manchin reportedly presented Biden with a $1.8 trillion social-spending package that he would be willing to support—but it did not include an extension of the enhanced child tax credit.

Biden, during his White House press conference last Wednesday, admitted that Democrats may have to break up the House-passed legislation in order to get “chunks” of it through the Senate.

“It’s clear to me that we’re going to have to probably break it up,” he said.

“I think that we can get—I’ve been talking to a number of my colleagues on the Hill—I think it’s clear that we would be able to get the $500-plus billion for energy and the environment issues that are there,” he added.

Speaker Nancy Pelosi later noted that the expanded child tax credit, funding for universal prekindergarten, and child and home health care subsidies are some of the provisions “that have to be contained in the bill.”