Here's One Reason Why Your Tax Return is So Complicated 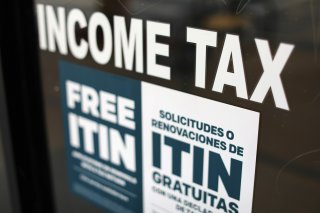 Politicians have promised to make tax filing easier for years. Steve Forbes famously ran for president with a call for a flat tax, and has repeatedly suggested that the federal income tax code is an "incomprehensible, opportunity-killing and corrupting monstrosity." The Trump administration even unveiled a "postcard-sized" tax form that would make it far easier for most Americans to do their own taxes.

So why are American taxes still so complicated?

The answer is that it benefits the professional tax filers. Many of these organizations have successfully lobbied against the Internal Revenue Service's (IRS) efforts to streamline the process. When Congress directed the IRS to provide low-income taxpayers with free tax preparation, which resulted in 2002's "Free File," the IRS had to agree not to compete with the private sector in the free tax preparation market.

According to a 2020 report from ProPublica, Intuit makes $1.6 billion operating income from its TurboTax unit. Free File and similar programs represent a significant threat to the company's profits.

There’s big money in tax preparation services. Some of the income generated by H&R Block and Intuit is then poured back into lobbying efforts to keep the tax code needlessly complicated. Since 1998, those companies and other tax preparers have spent millions, and those efforts have paid off.

Some lawmakers have seen that our complex tax code is a waste of time and resources. The average American currently spends thirteen hours doing their taxes and paying tax prep companies $200, according to estimates by the office of Sen. Elizabeth Warren (D-Mass.), NBC News reported in 2017.

Other countries have found a way of making the process easier.

Some European nations have opted for pre-populated returns, which includes an annual report that generally takes fifteen minutes or less for taxpayers to fill out. Such a system is unlikely to have any chance of passing in the United States.

One reason is that even anti-tax groups wouldn't be on board, as it might make Americans less angry about their taxes. Many Americans now accept that taxes are needed to pay for the roads, schools, and to keep the country running. If taxes were easier to file there might not be so much resentment. That is why groups including Americans for Tax Reform aren't eager to see the process made easier.

Given the forces that are at work, and the fact that the IRS is now understaffed and has some of the most antiquated computer systems in the federal government, it is unlikely tax filing will be made easier anytime soon.