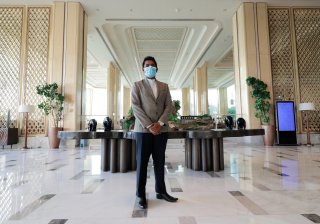 Hotels across the United States are muddling to find people to return back to work as a widespread labor shortage knocks down nearly every industry, forcing some businesses to decrease supply and raise prices.

While some hotels are now offering employees and prospective workers higher wages and expanded access to healthcare, others have decided to give them cash bonuses and free fitness machines.

The Gansevoort Meatpacking hotel, located in New York City, granted senior members of its staff a connected fitness machine priced at $1,345, dubbed The Mirror, after working virtually for eight months. But the reward doesn’t stop there, as staffers will receive a $42 per month subscription to get access to online workouts.

The hotel has not only been reporting difficulties in finding people to work but also the hiring staff has faced uphill battles in retaining past employees.

“Hiring has been incredibly challenging. Not only is finding qualified candidates difficult but there is a consistent acceptance of offers and then no-shows on the first day. [Some] staff are also finding other jobs and walking out for minor salary bumps at competitive properties,” Michael Achenbaum, president and founder of Gansevoort Hotel Group, told Fox Business.

Cape Resorts, a hotel group with properties in beach towns, could only staff 75 percent of its New Jersey and New York properties in May. The group is now offering new and returning staff free accommodation and board where employees can enroll in a hospitality training program catered toward boosting skills in accounting and marketing.

“We do have housing opportunities here and we’re leveraging those in our recruitment. It’s a full employment package where they can come be by the beach and learn a new industry,” Curtis Bashaw, the chief executive of Cape Resorts, told Fox Business.

Omni Hotels & Resorts is offering workers a spate of back-to-work incentives, including free hotel stays for certain summer employees and wage hikes based on experience. All of Omni’s newly hired employees for the summer will also see a $250 signing bonus in addition to a $500 retention bonus once the season is over, according to the New York Times.

“We have put aside guest rooms in our hotels so employees wouldn’t need to worry about where they would live so they could take this job,” Joy Rothschild, Omni’s chief human resources officer, told the New York Times. “We have never taken guest rooms out of inventory for housing before.”

Those who are a part of the culinary team will get a free set of knives, along with weekly sit-downs with executive chefs.

“We needed to do something to grab the attention of culinary students,” Rothschild added. “I’ve seen a lot of people offering monetary incentives, but we didn’t feel that was enough. The college students coming want something more than the paycheck.”

Other hotels, however, are offering long-term benefits.

ACE Hotel New Orleans is providing workers with health benefits, including medical, dental and vision, which will become available on the first day that they report to work, a departure from the hotel’s original pre-pandemic policy that offered employees health benefits after a ninety-day period.

The incentives come as businesses across the country have found difficulty in getting people to return back to work, despite the high unemployment rate compared to pre-pandemic levels.

Several congressional Republicans have argued that the widespread labor shortages were caused by President Joe Biden’s $1.9 trillion coronavirus stimulus package, as the law sent millions of Americans federal aid to provide them financial support during the pandemic. GOP lawmakers contend that the stimulus disincentivized people from returning to work.

More Americans have also been quitting their jobs, as the Labor Department reported that roughly four million people quit in April, a figure that hasn’t hit that high for the last two decades.