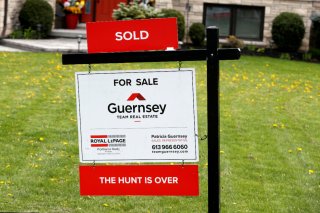 There’s no question that most people agree that the current U.S. housing market is just too hot.

Within the past two years alone, home prices have shot up well over 30 percent, reaching a median price of $391,200 in April, according to data released by the National Association of Realtors (NAR).

However—perhaps much to the delight of budget-conscious first-time homebuyers—it finally appears that a market cooldown is in the offing.

As reported by CNBC, NAR data indicate that sales of previously owned homes in April fell nearly 6 percent year-over-year to the lowest point since the Covid-19 pandemic began more than two years ago. Likely adding more pain to the market are fast-rising thirty-year fixed mortgage rates that have climbed to 5.35 percent, according to Mortgage News Daily. For comparison, that rate was sitting at 3.66 percent in early February.

“We are moving back to pre-pandemic sales activity, but I expect further declines,” Lawrence Yun, chief economist for NAR, told the business news outlet.

Furthermore, per Reuters, a new report from the Commerce Department showed that permits for future U.S. homebuilding fell to a five-month low in April.

“Housing construction appears to be undergoing a transition, with the sector caught between sharply rising mortgage rates and declining affordability on the one hand and supply-chain constraints on the other that continue to result in rising backlogs of projects,” Conrad DeQuadros, senior economic advisor at Brean Capital in New York, told the news agency.

Despite these market conditions, home sales have continued to close at a swift pace, with the average home sitting on the market for just seventeen days. All-cash sales represented 25 percent of all transactions, while investors made up 17 percent of sales and first-time buyers made up 28 percent.

“The number of households interested in becoming homeowners remains high, despite waning confidence that now is a good time to buy. This is especially true among younger home shoppers, who are likely to be first-time buyers and are struggling to save for a down payment as rents continue to hit records,” Danielle Hale, chief economist at Realtor.com, said in a statement.

“At the same time, seller expectations for higher down payments seem to be rising, fueled by a still-competitive housing market and repeat buyers with relatively more equity at their disposal,” she continued.

Meanwhile, Zillow’s housing market outlook is now calling for a gradual slowdown in annual home value growth from the current pace of 20.9 percent to 11.6 percent through April 2023. That is down from a forecast of 14.9 percent made in March.

Over the next three months, Zillow expects home values to appreciate 5.2 percent, which is down from an expectation of 5.5 percent in the previous month’s forecast.