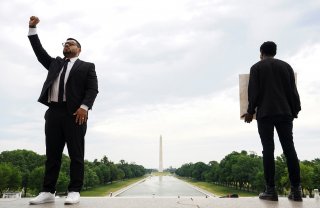 I was standing outside the People’s Liberation Army barracks in Admiralty, the eastern part of Hong Kong’s business district when the police threw me to the ground. I was humiliated and made to sit up against a wall while I waited to be transported elsewhere. I waited for two hours before they finally put me and other people on a bus headed to the North Point police station.

Still, I was treated better than the local Hong Kongers who had been arrested on account of my U.S. passport.  First of all, the police didn’t charge me with rioting, as they did many of the local youngsters. The kids did get to have McDonalds delivered by their parents but I didn’t mind the jail food; it was just as good as the food from outside (even breakfast, which is horrible in Hong Kong anyway).

The police officers at the station handled me with kid gloves as I was the only American to get arrested that day. They brought a police officer to me who spoke the perfect Queen’s English to interrogate me and inform me of my rights—the right to contact my consulate, to a lawyer (or “barrister” as they called it), to avoid self-incrimination and the rights of all those arrested (to be fed, access to the toilet, etc). These are considered standard today in the United States, Hong Kong, and anywhere with a solid British influence.

I have not seen anything comparable to the abusive police practices that took place in Hong Kong at the protests that have been taking place in my city of Houston, Texas. The protests have been more peaceful in Texas and the police have been much more restrained. That might be because Houston Police Chief Art Acevedo has joined the protesters, marching hand in hand, and expressed his solidarity.

In fact, he said, “I’m not going home tonight until every single person who wants to exercise their First Amendment rights has the opportunity to do so.” Imagine the authorities in a Chinese-controlled territory expressing their support for freedom of speech. It is inconceivable. Similar cases of city mayors and police chiefs supporting people’s free speech and opposing police brutality have been on display across the country in places like Camden, New Jersey; Flint, Michigan; Coral Gables, Florida; Fargo, North Dakota; and Santa Cruz, California.

The response in other cities and towns, however, has been much worse. In many cases, the police have responded with overbearing force and oppressive violations of rights, even.

Journalists have been shot with rubber bullets and arrested in cities like Minneapolis, Louisville, Las Vegas, Washington, DC and New York. In some cases, reporters were caught in the middle of chaotic scenes when it would have been hard for cops doing crowd control to distinguish individuals engaged in discreet actions. However, in the video of the protest in Louisville, it was clear that the police shot directly at a WAVE-TV crew, which had a camera and a microphone. The crew's members were the only people there at the time.

Omar Jimenez and his entire CNN crew were arrested while filming live in Minneapolis despite clearly stating that they were willing to move to a different location. The Committee to Protect Journalists has documented sixty-eight incidents of police arresting or using force against journalists covering the ongoing protests. Still, America’s imperfect democracy is not close to comparable with Communist China, where forty-eight journalists are held in prison and have been in custody for as long as a decade.

The United States is a big country and these are massive protests but they aren’t the size of Hong Kong’s protests. Anywhere from 338,000 to 2 million people took part in Hong Kong’s protests against the extradition bill in June in a metropolitan area that has a population of 7.4 million. That would be comparable to between 15 million or 80 million Americans protesting across the country.

The attacks on journalists are in addition to a number of attacks on protesters. You can point to a travesty here or there with the little girl drenched in milk because she got just tear-gassed or the man with his hands up and clearly unarmed getting pepper-sprayed by a cop right in front of him, or the protesters in New York City run over by an ignorant cop who has been suspended.

These are not “one-off” incidents. There is a system in this country where the police force is trained to view civilians as the enemy and vice versa. These people getting attacked and bloodied only drives home the point—the system must change.

In Hong Kong, however, there were eighteen- and nineteen-year-old men and women who had the barristers (free of charge) draw up their last will and testimony—they were that sure they wouldn’t survive the night. Households in Hong Kong were driven apart. Father against son, mother against daughter, the brother who works as a cop versus the brother who was protesting to keep Hong Kong free.

The vast majority of U.S. police officers, as well as Hong Kong’s officers, for that matter, put on the badge to protect and serve, and right now, society is rooting out the nastiness in our police departments, starting with former Minneapolis Police Department officer Derek Chauvin. Hopefully, all three of the officers with him the day he brutally and summarily executed George Floyd will be charged following an investigation. They all have a right to a fair trial by a jury of their peers, a right denied to George Floyd because he was suspected of floating a fake twenty-dollar bill—a crime that wouldn’t even get a person the death penalty in such a draconian state as Saudi Arabia.

Overall, the protests in Hong Kong, while larger in number, were not as violent or chaotic as the protests in the United States. The protesters were more disciplined, and even when rioting took place, they were more strategic in their targets. For example, they smashed the windows of the shops belonging to major companies linked with Mainland China, like Xiaomi.

In my opinion, what I saw in Hong Kong was a highly organized, very dedicated, very professional choreographed opera of activities; there were jobs and assignments to go around. A protester could hold a shield made out of road construction barriers, one could spray paint security cameras, another would build a wall out of brick and mortar in the middle of the street, and they might ransack the Bank of China. Nobody looted—they just destroyed. They were an efficient, well oiled—pardon the pun—freedom-loving machine! I see some of the same qualities

in America’s protesters, but honestly, looting sends the wrong message; it always will. It

sends the message that the reason behind the vandalism was to get the goods.

The targets of the violence in Hong Kong were specifically chosen for their political meanings. Among them, Best Mart 360, HSBC, and Starbucks China are suspected of having ties to Fujianese triads, which were let loose on peaceful protesters in 2014 and 2019 in order to injure and instigate. Now, I’m not the biggest fan of Target but seeing it go up in flames doesn’t evoke feelings of victory in me nor does seeing a mom-and-pop store that managed to weather the coronavirus shut down only to be victimized and left smoldering give me a feeling of accomplishment.

A. Patrick Rincon is a retired U.S. Marine who travels the world. He has been published in Roads & Kingdoms and interviewed by the Marine Corps Times. Follow him on Twitter at @ElPatoRincon.