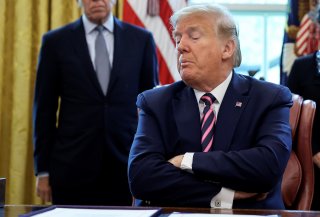 “The pandemic has highlighted for us that national security also involves the assets that we can harness and put against an invisible enemy,” said Krish O’Mara Vignarajah during an interview with Ploughshares Fund podcast, Press The Button. “And that includes the health care providers, the nurses, the doctors, the aides who are serving in assisted living facilities. So many of them are made up by refugees and other immigrants.”

Vignarajah is the president and CEO of the Lutheran Immigration and Refugee Service, one of nine resettlement agencies working with the U.S. Department of Health and Human Services to provide advocacy and support for immigrants and refugees. She argued that the central justification for the immigration clampdown - the Trump administration’s claim that a faltering US economy cannot absorb any more foreign workers - is based on a myth.

Far from being a threat to the United States in its fight against COVID-19, immigrants are providing vital national services, explained Vignarajah, particularly in a time when experts are redefining traditional notions of national security.

“Repeatedly you hear this claim that refugees are actually a potential threat instead of a defense to our national security. That terrorists are trying to slip into the country undetected, that this is why we have to close our borders,” complained Vignarajah. “Refugees are the most vetted immigrants of any kind. We're talking more than a dozen different background checks, security checks, fingerprinting, health screening, in-person interviews with DHS.”

Fears of lawless, immigrant gangs, like MS-13, are also misplaced. "MS-13 began in LA in the 1980s. We exported it to half a dozen countries as we deported these individuals,” Vignarajah pointed out. Research shows that immigrants and refugees actually make our country safer. One study done on the top ten cities that absorbed refugees showed that “nine out of ten had significant improvements in violent crime and economic crime, crime across the board."

The Trump administration’s immigration order may also have ripple effects that outlast the pandemic, Vignarajah warned. Many countries still look to the United States as a leader on immigration and refugee resettlement. If Washington is making the case it can’t take any more immigrants, other capitals may follow. “Right now, we’re talking about 72 million refugees around the world,” she said. “We can’t do this alone. It takes a global coalition of states.”

American antipathy towards immigrants and refugees may have military consequences, too. Vignarajah told the story of Kareem, an Iraqi who served as a translator for the U.S. military following the fall of Saddam Hussein in 2003. It was a dangerous job. “Any association with American forces can bring incredible danger,” Vignarajah explained, “not just to the translator, but also to their family.”

Faced with mounting death threats, Kareem and his family were resettled in Nebraska. His friend Mohammed, a doctor who worked with the U.S. military, was not so lucky. In 2012, he was murdered in his clinic by armed insurgents.

“This is where U.S. forces talk about how we leave no man behind,” said Vignarajah, noting military officials “are some of our most vocal advocates” on refugee resettlement. “It was General [James] Mattis who wrote that the failure to honor our commitment to those who supported the U.S. would undermine our diplomatic and military efforts by making it difficult to sustain the support of partners elsewhere.”

“They fear that if we don’t meet our promise, we will have difficulty when we need to wage the next war.”

To allay this danger, Vignarajah is advocating for a pro-immigration united front. Last year, her organization partnered with the Hispanic Heritage Foundation “around a campaign responding to threats of mass deportations from the administration.”

Vignarajah is also joining with some non-traditional allies. Just last week, she recorded a video with the National Wildlife Federation on how the climate crisis is affecting immigration. “Two thirds of the migrants that we see today are actually a result of climate displacement,” said Vignarajah. “This is only going to get worse going forward.”

Ultimately, Vignarajah hopes to return immigration and refugee resettlement to its traditional place in the national sphere. “We used to lead the world in accepting refugees. We were an exemplar,” she said. “These kinds of programs have always had bipartisan support.”

“America will always be its strongest when it remembers Its history of being a nation born and built by immigrants.”

The complete interview with Krish O’Mara Vignarajah is available at Press The Button.

Joe Cirincione is the president of Ploughshares Fund, a global security foundation that supports initiatives to reduce and eventually eliminate the dangers posed by nuclear weapons.

Zack Brown is a policy associate at Ploughshares Fund.