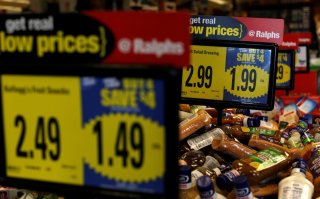 There appears to be no end in sight to the red-hot inflation that is spreading like wildfire all across the country.

The latest inflation reading by the Labor Department revealed that year-over-year price increases have surged a whopping 8.5 percent, the biggest figure seen since February of 1981.

Against this concerning backdrop, it should not come as a huge surprise that cash-strapped Americans received more terrible news recently when the U.S. Department of Agriculture (USDA) released an update to its Food Price Outlook for 2022, which showed that “all food prices are now predicted to increase between 4.5 and 5.5 percent.”

Those hefty figures are on top of a nearly 8 percent bump seen over the past year.

The USDA has acknowledged that a more hawkish Federal Reserve and the Russian invasion of Ukraine are key factors for the fast rise in food prices. “The situations will be closely monitored to assess the net impacts of these concurrent events on food prices as they unfold,” the report stated.

According to Matt Dmytryszyn, chief investment officer at financial advisory firm Telemus, grocery stores and supermarkets have been more aggressive in ramping up prices compared to restaurants.

“Restaurants tend to reset menu prices on a periodic basis and we would expect added price hikes in the near future,” he told CNBC.

“Ultimately, we expect pricing to be more balanced between food at home and away from home,” he continued.

As outlined by USA Today, certain food items are seeing bigger price increases than others. Here’s how the paper broke them down.

Poultry items are expected to see the highest rise in prices of between 6 percent and 7 percent. According to USDA, the main factor for the price increases is the outbreak of the bird flu, which has been detected in more than twenty states. As such, eggs have also become more expensive, with a predicted price increase of 2.5 percent to 3.5 percent.

Fats and oil products are expected to see a 6 percent to 7 percent rise in prices. Meanwhile, wholesale items could see price increases of up to 30 percent, the largest estimate of all food groups.

Fresh fruits are expected to increase 5 percent to 6 percent, while fresh vegetables are estimated to rise between 1 percent and 2 percent, the smallest figures seen for any food item.

Both of these categories will each see an estimated jump of between 3 percent and 4 percent.

Drinks like soda and juices are expected to rise by 3.5 percent to 4.5 percent.