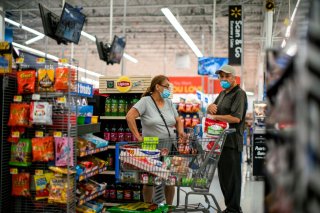 The consumer price index (CPI) jumped 8.3 percent in April year-over-year, falling slightly from 8.5 percent in March, which was the highest since 1981, the Bureau of Labor Statistics reported on Wednesday.

On a monthly basis, prices rose 0.3 percent from March to April, the smallest increase seen in eight months.

Those figures were both higher than the 8.1 percent headline figure and 0.2 percent monthly gain forecast by Refinitiv economists.

Despite showing signs that inflation may have peaked, the Labor Department’s report contained some cautionary signs that the current high-inflationary environment may be the norm in the months ahead.

The price jumps seen over the past month “make clear that there is still a long way to go before inflation returns to more acceptable levels,” Eric Winograd, an economist, told the Associated Press.

Per Fox Business, so-called core prices—which exclude more volatile measurements of food and energy—rose by 6.2 percent in April compared to the year prior. On a monthly basis, they climbed 0.6 percent, double the 0.3 percent increase registered in March.

“This is another upward inflation surprise and suggests that the deceleration is going to be painstakingly slow,” she told Fox.

“The focus will soon start shifting from where inflation peaked to where it plateaus, and we fear that it will plateau at an uncomfortably high level for the Fed,” she continued.

The slight slowdown in inflation came as energy prices declined 2.7 percent for the month, including a 6.1 percent drop for gasoline. The food index, however, rose 0.9 percent. On an annual basis, energy costs are up 30.3 percent, while food has risen 9.4 percent.

“The markets were hoping for a better number and it’s not good enough to rule out more Fed tightening,” she added.

The shelter index—which comprises roughly a third of the CPI weighting—trekked higher by another 0.5 percent over the past month and is up 5.1 percent on a yearly basis, the fastest surge since April 1991.

As for airline fares, they rose 18.6 percent on the month and are up more than 33 percent over the past year.