Is It Time to Cut Social Security and Medicare Spending? 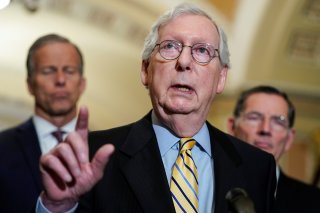 The last few years have been something of a golden age for government spending.

Since the start of the pandemic, both the Trump and Biden administrations have passed massive stimulus bills. Congress is currently negotiating even more spending, in the form of a pair of large infrastructure measures.

Meanwhile, there isn’t much vocal pushback against that spending. It wasn’t a major issue in the 2020 election, and the Republicans in Congress have not made spending concerns a major part of their messaging, which has traditionally been the case during past Democratic presidential administrations.

However, a recent op-ed did in fact call for cutting of spending, including for Social Security and Medicare.

Peter Crabb, a professor of finance and economics at Northwest Nazarene University, wrote in a column published by the Idaho Statesman that “Congress must consider cuts in Medicare and Social Security.”

“The bigger question no one wants to talk about is how much the government is spending and how it goes about raising taxes. This question has more serious implications for our economic well-being,” Crabb wrote.

Crabb went on to cite an economic theory called the Barro-Ricardo Equivalence, also known as the Ricardian Equivalence.

“Barro-Ricardo equivalence states that the timing of government spending has no effect on the economy today,” he stated in the column. “If the government borrows more to spend now with the idea it will pay off the debt with tax revenues later, it is just the same as if the government raised taxes today. The public buys up the new bonds, and in so doing, reduces current consumption just as it would with a new tax.”

He goes on to note that under that theory, “the debt issue can be addressed only by changing the federal government’s long-run spending plans.” And he says that in order to cut spending, “ will have to consider cutting benefits in Social Security and Medicare, which make up most of the budget. . . . It’s time to end the borrowing debate and address the underlying cause of the problem.”

The Ricardian Equivalence is far from a broadly accepted economic theory.

“In economics jargon, this idea is known as Ricardian Equivalence. According to this proposition, public transfers financed with government debt do not affect consumption because households save them to pay for the increase in taxes that will eventually be necessary to repay that debt,” the Federal Reserve Bank of New York’ Liberty Street Economics blog wrote in April. “If Ricardian Equivalence held, the marginal propensity to consume out of debt-financed transfers would be zero, and the resulting savings would never be spent.”

Furthermore, it doesn’t appear likely that anyone in Congress—even the most fiscally conservative Republicans—believes there is an urgency to impose deep spending cuts, especially not ones that would trim popular programs like Social Security and Medicare.