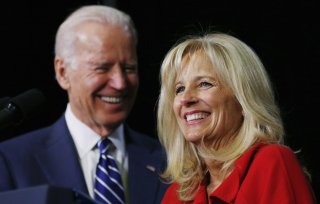 First Lady Jill Biden pushed for access to free community college and training programs for all Americans on Tuesday as a way to bring the economy out of turmoil.

The longtime community college professor and education advocate stressed that the coronavirus pandemic has had a steep impact on higher education and students’ financial ability to enroll in college.

Biden, who continues to teach virtually from the White House, added that community colleges are no longer America’s “best-kept secret”—a notion that she’s repeatedly stressed in the past—but said that “they are our most powerful engine of prosperity.”

“We’re going to make sure students have the support they need to cross that finish line,” she said. “We’re going to invest in programs that prepare our workers for jobs of the future.”

And with a divided Congress and a 50-50 split Senate, education policy experts seem skeptical about the Biden administration swiftly pushing through higher education legislation, but noted that there’s been general bipartisan support for reform.

“There doesn’t seem to be anything pushing policymakers to make changes in the immediate term and so I'd be surprised to see movement on this soon. However, in the scheme of proposals currently circulating in the education policy space, this one probably has the broadest support,” Beth Akers, a resident scholar at the American Enterprise Institute, said.

Thomas Brock, a research professor and the director of the Teachers College’s Community College Research Center at Columbia University, added that lawmakers understand the “valuable role community colleges play” in offering affordable education for varying income levels and how students fill a spate of roles in “critical fields.”

“There is widespread support for community colleges on both sides of the aisle,” Brock said. “Policymakers generally recognize the valuable role community colleges play in providing an affordable education that prepares students for employment in health care, [information technology] and other critical fields, and that supports transfer to four-year colleges.”

The first lady’s comments come as more than 43 million borrowers are saddled with student loan debt, as the average cost of tuition and fees at community colleges was $3,730 during the 2019-2020 academic year, while the average for in-state students at four-year public colleges was about $10,440, The Associated Press reported.

And while free community college would likely offer a financial ledge for low- and middle-income families who are already drowning in other bills, some state-level free higher education programs have requirements that must be met in order to receive funding.

“There are several models of ‘free community college’ that could be enacted. What we've seen, in New York, for example, is that when you add complexity to these free college programs you end up decreasing the amount of benefits that get to the most needy students,” Akers said.

In New York, Gov. Andrew Cuomo (D) signed a law in April 2017 that would cover the cost of four years worth of college tuition for low- and middle-income students—but with strings attached. The program considers students from families that earn under $125,000 per year but also expects them to enroll as full-time students, likely impeding on the opportunity to work during the semester.

“That meant that students who were having to work while enrolled missed out on the benefits. Policymakers would have to balance that concern with the desire to constrain spending,” Akers added.

Students must also maintain a minimum of a 2.0 GPA to maintain the funding support and commit to working in New York after graduation for a certain amount of time.

Several other states have followed suit, including Maryland and California, offering free community college programs as long as they enroll as full-time students.

But the scholarships only cover tuition and mandatory fees for eligible students left over after they’ve applied for all other sources of financial aid, such as Pell grants and state aid. And the funds don’t typically apply to campus housing costs, transportation costs and textbook costs, which could add up to as much as an additional $20,000 per year.

“In my view, the best policy would not be limited to community colleges, but would make the first two years of college more affordable no matter what type of institution a student chooses (two- or four-year), up to a reasonable limit,” Brock said. “Generally speaking, students attending four-year institutions have better education and employment outcomes, and we would not want a free college policy to siphon students away from these schools. The goal should be to increase college attendance and completion across the board, and to help students complete degrees in a timely fashion.”

In fall 2020, community college enrollments fell 9.5 percent nationally and community college freshman enrollment decreased by 19 percent, according to data from the National Student Clearinghouse Research Center, likely due to the economic rubble that’s developed due to the pandemic. And undergraduate enrollment in the fall slipped 4 percent compared to one year prior.

“The notion of free college seemed radical just a handful of years ago. It has now permeated the general political discourse. I never would have predicted that we'd be talking about things like free college or student loan forgiveness today. So it's hard to predict where this movement will stop,” Akers said.