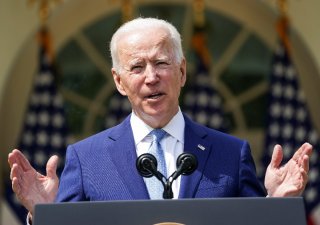 Ever since the passage of the American Rescue Plan Act in March, many have been calling for additional stimulus checks, through a fourth round of checks. A petition asking for more checks has earned more than 2.25 million signatures, and members of Congress have written letters pushing for more checks.

However, there have been indications from the White House over the last few months that they weren’t interested in pursuing another stimulus package, beyond a pair of proposed spending packages, the American Jobs Plan and American Families Plan.

On Thursday, the White House gave the strongest indication yet that no more universal checks are on the way.

"He's happy to hear from a range of ideas on what would be most effective and what's most important to the economy moving forward," White House Press Secretary Jen Psaki said of the president, as reported by Business Insider.

"But he's also proposed what he thinks is going to be the most effective for the short term for putting people back to work, to getting through this pivotal period of time, and also to making us more competitive over the long term,” Psaki said about the Biden spending plans.

Psaki had said something similar in a different briefing, about a month earlier.

"We'll see what members of Congress propose, but those are not free," Psaki had said in early May. That was a reference to the infrastructure package, which includes pay-for, while the American Rescue Plan, similarly to the Cares Act last year, was financed with deficit spending.

According to The Hill, the president is currently in negotiations with Senate Republicans about a potential bipartisan compromise on infrastructure.

“Allies say that Biden truly wants a bipartisan deal, but he’s also encountering growing pressure from some Democrats to abandon the negotiations with Republicans and pursue a bill using budget reconciliation,” The Hill reported about the infrastructure talks. “Democratic sources say it is difficult to see negotiations dragging on past mid-June and expect Biden to make a decision before then on whether to cut a deal with Republicans or try to go it alone with Democrats.”

Pete Buttigieg, the Secretary of Transportation, has stated that the Biden Administration wants a “clear direction” on where things are going with the infrastructure negotiations by June 7, which is next Monday.

“He is appreciative and heartened by the good faith effort that we have seen from Republican senators, but as the president said last week, we do need to finish these negotiations soon because we are in a race to win the 21st century, and the pandemic exposed just how badly we need to invest in the foundation of this country,” deputy press secretary Karine Jean-Pierre said this week, per The Hill