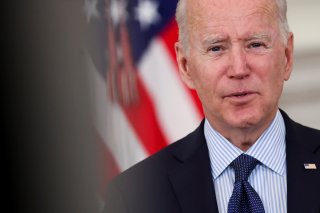 President Joe Biden addressed a joint session of Congress last week for the first time, where he called on Democrats and Republicans to pass his ambitious proposals that inject federal funds into infrastructure and a number of family-related policies. Since then, the president, first lady Jill Biden, Vice President Kamala Harris and other key players in the infrastructure and jobs fight have been traveling across the country in efforts to sell the administration’s big-spending plans.

But the efforts omit a massive promise that Biden echoed on his presidential campaign trail—whether the administration will forgive student loans for federal borrowers.

The president’s $1.8 trillion American Families Plan, however, calls for free community college and invests more than $300 billion in expenditures toward higher education. Biden has also previously asked Education Secretary Miguel Cardona to put together a memo on the president’s “legal authority” to cancel up to $50,000 in federal student loan debt through executive order, which wouldn’t require Congress’ approval, but the administration has reportedly not completed its review of the president’s legal authorities.

And while student loan borrowers and advocacy groups await the administration’s findings and Biden’s ultimate decision, lawmakers have ramped up efforts to implement a massive student loan forgiveness measure.

At a Senate subcommittee hearing last month on student debt, the subcommittee’s chair, Sen. Elizabeth Warren (D-Mass.), opened the meeting with a striking statistic—36 million out of the 43 million federal student loan borrowers, or 84 percent, would have all of their debt cancelled if the president cut $50,000 in loans per borrower.

A number of congressional Democrats, including Warren, have continuously pressured the White House to unilaterally forgive $50,000 in federal student loans per borrower through the Higher Education Act, a measure that Biden rejected at a town hall event in January. Instead, he’s expressed support for a $10,000 cancellation.

The White House also found itself under seething pressure recently after 416 community and professional organizations signed a letter to Biden, pushing him to eradicate student debt. The letter was first sent in November and then again in January, which has been updated with 85 additional signatures.

“During the campaign, you endorsed $10,000 of relief while Congress negotiated the CARES Act, and subsequently promised to provide broad student debt cancellation ‘immediately’ as a coronavirus response. Administrative debt cancellation will deliver real progress on your racial equity, economic recovery, and COVID-19 relief campaign priorities,” the groups wrote. Signers include the American Civil Liberties Union (ACLU), American Federation of Teachers, the National Domestic Violence Hotline and the Sunrise Movement.

“Cancelling student debt would disproportionately help borrowers of color, respond to the coronavirus crisis, and provide much needed economic relief and stimulus. We call on you to deliver on the promise of the Biden-Harris Racial Economic Equity plan by cancelling federal student debt by executive action immediately,” they added.

In the meantime, the White House has provided federal student loan borrowers with a forbearance program, with the interest set at zero percent. That means the borrowed amount will not grow during this time, but the program expires Sept. 30, 2021.

The Education Department also cut student debt for borrowers who were defrauded by their colleges, as well as those with total and permanent disabilities.

But even with these major measures in place, Biden has still failed to resurface his campaign promise to cancel some form of student debt for federal borrowers.