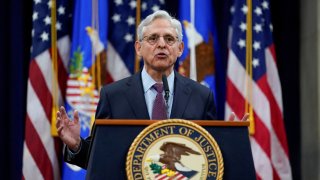 The Justice Department on Thursday appealed a court-ordered special master review of the highly sensitive documents seized from former President Donald Trump’s Mar-a-Lago estate, according to a new Politico report.

In a new court filing, prosecutors argued that U.S. District Court Judge Aileen Cannon’s decision to halt the FBI’s probe temporarily would cause “irreparable harm” to efforts by the intelligence community to protect national security interests.

“[I]n order to assess the full scope of potential harms to national security resulting from the improper retention of the classified records, the government must assess the likelihood that improperly stored classified information may have been accessed by others and compromised,” Justice Department counterintelligence chief Jay Bratt said in the filing.

“But that inquiry is a core aspect of the FBI’s criminal investigation,” he continued.

The Justice Department also challenged Cannon’s contention that Trump might have a legitimate executive privilege claim over some of the FBI-seized documents.

On Monday, Cannon, a Trump appointee, ordered that an outside third-party attorney should review the documents taken from Trump’s home and resort in Florida.  The ruling stops the Justice Department from continuing its review of the documents “pending completion of the special master’s review or further Court order.”

However, the classification review and intelligence assessments by the Office of the Director of National Intelligence will be allowed to continue.

The Justice Department slammed Cannon’s attempt to prohibit the FBI investigation while permitting a national security review of the documents.

“[S]uch bifurcation would make little sense even if it were feasible, given that the same senior DOJ and FBI officials are ultimately responsible for supervising the criminal investigation and for ensuring that DOJ and FBI are coordinating appropriately with the [Intelligence Community] on its classification review and assessment,” Bratt wrote.

“The injunction against using classified records in the criminal investigation could impede efforts to identify the existence of any additional classified records that are not being properly stored—which itself presents the potential for ongoing risk to national security,” he continued.

Cannon explained that the special master will be responsible for reviewing “seized property for personal items and documents and potentially privileged material subject to claims of attorney-client and/or executive privilege.” She added that the “Court is mindful that restraints on criminal prosecutions are disfavored but finds that these unprecedented circumstances call for a brief pause to allow for neutral, third-party review to ensure a just process with adequate safeguards.”