Kamala Harris: The Case For (And Against) Biden Picking Her for Vice President 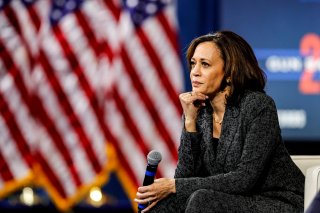 Weeks of ongoing speculation has finally come to an end. Presumptive Democratic nominee Joe Biden announced Tuesday that Sen. Kamala Harris (D-Calif.) is his running mate for the upcoming election.

Biden’s manicured and prolonged decision left the Democratic party boiling in suspense, as nearly a dozen names were considered in the mix. His thoughtful announcement on Twitter topped that of John McCain’s for Sarah Palin and Hillary Clinton for Tim Kaine.

Why was her vice-presidential candidacy so special and illuminated by the Democratic party? Because it’s clear that Biden doesn’t intend to run again in 2024, if elected, and instead will serve as a “transitional president” who will turn over the presidential reigns to Harris after his term is up.

Even though Harris is now the future of the modern Democratic party, there are positives and negatives to her candidacy. Here are some outlined below.

The positives for Harris’s vice presidency.

Harris is the third woman, the first black woman and the first candidate with Indian descent in U.S. history to run on a Democratic—let alone a major—party’s ticket.

In 2016, Democratic nominee Hillary Clinton failed to attract enough black voter turnout compared to former President Barack Obama—particularly in battleground states. During Obama’s presidential run, black voters held 13 percent of share of ballots that were cast in Pennsylvania, which declined to 10 percent in 2016, according to exit polls. Perhaps the drop in black voter turnout was because of the lack of representation on the 2016 Democratic ticket, causing Clinton to miss crucial states that could have earned her the presidency.

Harris is also a female political role model, especially for black young women. Her candidacy can transform the classic perspective that America has seen in previous presidents and vice presidents—with barely any minority representation. Hopefully, Biden’s choice will mend existing, traditional mindsets about the black community and how they perceive one another.

Harris is a fearless debater, even when her campaign for the presidency drowned underwater. Biden has personally experienced her ability to jab an opponent on the primary debate stage, marking a memorable moment in political history and earning her the reputation as being feisty and quick-on-her-feet. Maybe Biden can get some tips from Harris since he’s been publicly scrutinized on his debate performances.

As a senator, Harris has public speaking experience under her belt, as she’s recently pressed then-Attorney General Jeff Sessions in 2017, leaving him “nervous” for her persistent questioning, and Sen. John Cornyn (R-Texas) on the Senate floor.

Her experience in law enforcement—when Harris was California’s attorney general for six years—has also rewarded her extensive verbal skills when taking on an opponent, criminal or suspect that’s subject for examination. Harris will be able to flaunt this political talent of hers in October when she and Vice President Mike Pence battle head-to-head in Utah for the first—and only—vice presidential debate.

Although Pence could take on Kaine in 2016, Kaine is no match over Harris.

Harris represents a state that’s voted predominantly blue for the last seven presidential elections. The Republican party is so small in the liberal, left-leaning state, so a Democrat will most likely take over her spot if the Biden-Harris ticket wins in November.

The negatives for Harris’s vice presidency.

1. Some Progressives Don’t Trust Her

Harris’s track record on a number of economic, health and social policies has been a bit unclear particularly during her experience as a prosecutor. The far-Left argues that she is less progressive than what she boasts.

“As we saw during her own presidential campaign, Kamala Harris is a political weathervane. First, she was for Medicare for All. Then she wasn’t. She failed for years to hold police accountable for gross misconduct in California, then touted her commitment to police accountability in the wake of George Floyd’s murder,” Roots Action and the Progressive Democrats of America said in a statement.

During her presidential run, Harris was wishy-washy in her responses supporting Medicare for All, as noted in the group’s statement who strongly backs Sen. Bernie Sanders (I-Vt.).

In the LIFT Act, sponsored by Harris, the legislation would provide sizable cash payments to middle-class households and has been noted as an anti-poverty plan. But, the bill digs deep in the federal funds pocket and hasn’t proved to be that helpful to the poorest and most financially struggling households in the United States.

2. Her Presidential Campaign Was a Bust

Although she once was placing second behind Biden in the polls during the presidential race, Harris dropped out because of the underwhelming support from most Americans and depleted financial resources. In December of 2019 when she made the official announcement, she polled behind Pete Buttigieg in South Carolina.

Despite being a black woman, Harris couldn’t rally enough support from black voters. Instead, Biden grappled most of the black voter base—perhaps because of his relationship with Obama. Her inability to encourage enough black and minority voters to join her campaign makes analysts skeptical of her skills and capability of boosting support for the party in the future. Harris’s unpredictable behavior as a politician might tamper with the Biden-Harris ticket, considering her changing beliefs on issues including Medicare for All.

Her attack on the debate stage over Biden about his beliefs on busing will also be a target President Donald Trump will likely use, especially since she’s changed her views on busing to mirror that of Biden’s.

3. She Doesn’t Bring in a New Group of Voters

Since Electoral College votes from California aren’t likely to swing red in the upcoming election, Biden is missing out on a new group of voters that he couldn’t have gained just by himself. If he had chosen a candidate like Sen. Tammy Duckworth (D-Ill.) or Michigan Gov. Gretchen Whitmer, the presumptive nominee might have been able to attract a new demographic that his campaign couldn’t grasp.

In the upcoming weeks, there will be plenty of speculation and criticism towards Harris’s candidacy—especially as the race tightens and November comes closer. But, it’s clear that Biden sees beyond Harris’s vice presidency and wants her to be the face of the Democratic party in years to come.