Kristi Noem: The GOP’s 2024 Nominee to Take on Joe Biden? 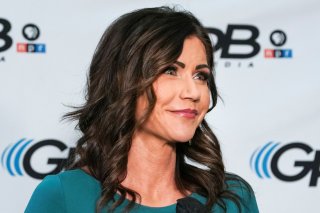 With the Republican Party scattered ideologically in the post-Trump era, several GOP lawmakers have risen in the ranks to lead the party and win back the White House in 2024.

One prospect includes South Dakota Gov. Kristi Noem (R), as she’s propped herself up in the national spotlight due to her loyal support for former President Donald Trump’s re-election efforts and rejection to the certification of the 2020 election results.

Noem has also built national steam with her handling of the coronavirus pandemic—a mirrored, hands-off approach to the former president’s—refusing to implement a statewide mask mandate to mitigate the disease’s spread.

The popularity has sparked calls for Noem to pursue a higher office.

“Governor Noem has certainly seemed to be positioning herself for a more national role in the last several months,” Julia M. Hellwege, assistant professor of political science at the University of South Dakota (USD), said. “While she may have previously indicated that she’s not interested in running for president, she is clearly seeking to establish herself, and I think has established herself, at the national level within the Republican party and it would not surprise me if she did seek the presidential candidacy in 2024.”

The first-term governor previously claimed she’s not interested in the job, and instead, is “focused on staying here in South Dakota.” But speculation for a Noem 2024 presidential campaign has swirled in recent months, as she even scored a speaking spot at the Republican National Convention this month during the party’s winter meeting that also serves to examine future GOP presidential candidates.

Hellwege noted, however, that “Noem and several other potential front-runners in 2024 are still waiting to make their move until they see what Trump will do,” since the former president has teased the idea of pursuing a non-consecutive term in four years—that’s if Congress doesn’t disqualify him for running for the commander-in-chief spot as part of his impeachment trial that’s expected to start in the upcoming days.

“As a former member of Congress, she has connections on the Hill and as governor, she has executive experience. As an avid Trump supporter though, it remains to be seen how she can bridge the various factions of the Republican party that have become more apparent in the past few weeks,” Hellwege said. “The Republican party has clearly lagged behind in women’s representation, and a female Republican nominee may be a strategic move for the party.”

Trump has also added to the flood of controversy over Noem’s political future, taking to social media to urge the governor to battle Sen. John Thune (R-S.D.) in the 2022 midterm elections.

But experts think that a second term as governor would position Noem in a stronger spot for a 2024 White House run, rather than challenging incumbent Thune next year.

“Remaining as governor is a much better shot than being a senator if she’s looking for a presidential bid because the timing would be right,” Michael Card, an associate professor of political science at USD, said. “She could run as an incumbent governor, rather than waiting several cycles. Should she decide to primary John Thune, I don’t think she’d be successful in that just because South Dakota voted for President Trump doesn’t mean they are going to turn on Thune. He’s the most popular politician in the state.”

When asked about her interest in running for a 2022 Senate seat against Thune, Noem rejected the notion and referred to him as a personal friend.

Card also noted that Noem is still “trying to figure out what she’s going to do” politically, but hasn’t significantly positioned herself like other GOP presidential prospects have, like former United Nations ambassador Nikki Haley, a rumored candidate who has begun to distance herself from Trump’s rhetoric while also echoing his far-Right ideology.

The South Dakota governor did, however, make an appearance at President Joe Biden’s inauguration.

Regardless, Card affirmed that “we can rule things out” in terms of what Noem will pursue next, suggesting that “she’s either going to run for re-election and maybe from there, seek a presidential bid.” The governor is up for re-election in 2022.