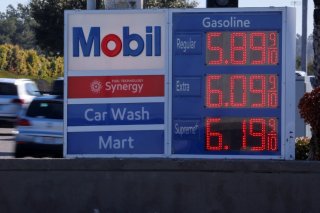 With the average gas price still above $4.10 per gallon, some desperate people are resorting to stealing fuel from service stations to fill up their vehicles or to resell to others for cash.

As reported by CBS News, police in Florida were able to arrest members of a criminal ring last month after they stole $60,000 worth of gas from stations in the Tampa area.

It appears that thieves are also targeting parked vehicles by drilling holes into gas tanks and siphoning the fuel.

“I was driving to go pick up food and stopped at the gas station. I started filling up with gas and the gas is just spewing everywhere. I got underneath the car and looked at it and there was a hole underneath the gas tank,” Nick Trujillo of Atlanta, Georgia, told the news outlet.

According to KOMO News in Seattle, police in Everett, Washington, are warning residents that thieves are using power tools to get to the gas.

“With the sharp and fast rise of price at the gas pumps we are seeing an increase in gas theft,” the police department said in a statement.

“While some thieves use rubber hoses to siphon fuel out, we are seeing modern day thieves use power tools to drill a hole in the gas tank and steal fuel. The cost of damage to the gas tank far exceeds that of the gasoline and we recommend that you park your vehicle in a garage or well-lit and high traveled area to help deter would-be thieves,” the statement continued.

After weeks of elevated gas prices across the country, there might be some more much-needed relief on the way. For the third consecutive week, the nation’s average gas price has slowly declined, falling about eight cents from a week ago and twenty-three cents from a month ago. The current price, though, is still $1.25 per gallon higher than last year.

“Gas prices have continued to move in the right direction—down—saving Americans approximately $100 million every day compared to when prices peaked about a month ago. And, more good news is on the horizon: the national average this week will likely fall back under the critical $4 per gallon mark,” Patrick De Haan, head of petroleum analysis at GasBuddy, said in a statement.

“It remains possible that gas prices may have hit their 2022 peak, barring the typical caveats like the Russia war on Ukraine, the economy, hurricane season and COVID don’t take drastic and unexpected turns. Diesel prices are also falling and likely to go back under the $5 per gallon average this week. The situation for now continues to show signs of improving, with the national average falling back into the $3 range as early as this week,” he continued.