A MAGA 2022 Contract With America? Donald Trump and Newt Gingrich Have a Plan 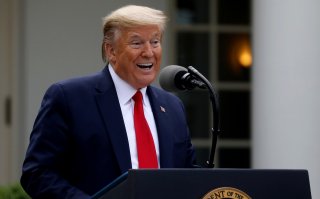 With more than a year until the 2022 midterm elections, former President Donald Trump is reportedly already preparing to craft a new policy agenda, one that’s largely based on former Speaker Newt Gingrich’s (R-Ga.) 1994 “Contract with America.”

According to Politico, sources familiar with Trump’s agenda noted that the former president is teaming up with Gingrich to hammer out the plan and has also sat down with former White House chief of staff Mark Meadows and Sen. Lindsey Graham (R-S.C.) at Mar-a-Lago in recent weeks as Republicans pivot their focus on taking back the House and Senate next year.

A source told the publication that although the specifics are still being worked out, the agenda is likely to have an “America First” policy approach on issues ranging from trade to immigration, describing it as “a policy priority for 2022 and beyond.”

Gingrich, a writer of the “Contract with America,” told Politico that the agenda shouldn’t be expected to be unveiled “anytime soon,” but mentioned a string of potential priorities.

“It should be positive,” Gingrich said. “School choice, teaching American history for real, abolishing the ‘1619 Project,’ eliminating critical race theory and what the Texas legislature is doing. We should say, ‘Bring it on.’”

The former speaker said that the agenda won’t debut until the 2022 midterm elections get closer since “the world keeps changing and evolving.”

But advisers close to Trump insisted that he is committed to winning back both congressional chambers in next year’s elections, as the former president has met with and endorsed several candidates.

“Policy talks are still in their infancy and it’s premature to project exactly what this will look like, who all will be participating in the effort and when something may be released,” a Trump spokesperson told Politico.

Just a month before the 2016 presidential election, Trump’s campaign introduced its own version of Gingrich’s agenda, dubbed the “Contract with the American Voter.” In it, Trump pledged to make 28 actions in his first 100 days in office.

While Trump hit some goals that included immigration, trade and tax policy, only a fraction of the goals outlined were completed, Politico reported. And in 2020, the GOP did not reveal any new platforms at the 2020 conventions.

The original “Contract with America” in 1994 helped the Republican Party gain its first House majority in four decades, as the GOP seized 52 seats in the House and nine seats in the Senate during President Bill Clinton’s White House term. Republicans have pointed to the document for elections ever since, like in 2010 when the GOP’s “Young Guns” crafted a 224-page document that was similar to Gingrich’s contract.