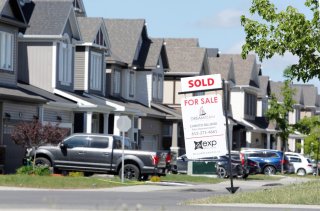 Long-frustrated potential homebuyers are finally seeing signs that the red-hot housing market is slowly shifting in their favor.

And now, home sellers are rushing to get their transactions completed before demand weakens further. In fact, Realtor.com data show that the supply of homes for sale was up a hefty 9 percent last week compared to the same period a year ago—the biggest annual jump the company has recorded since it began tracking the metric five years ago.

Furthermore, real estate brokerage Redfin confirmed that new home listings surged nearly twice as fast in the four weeks ending on May 15 as they did during the same period last year.

“Rising mortgage rates have caused the housing market to shift, and now home sellers are in a hurry to find a buyer before demand weakens further,” Redfin Chief Economist Daryl Fairweather said in a statement.

“Not only are more homes hitting the market each week, but sellers are dropping their price at rates not seen since before the pandemic. This sudden pressure on sellers is good news for those homebuyers who can still afford to buy at today’s higher mortgage rates. These trends point to an even cooler market this summer,” she continued.

New data from the National Association of Realtors is clearly showing that the market is softening. Per Reuters, the Pending Home Sales Index, which is based on signed purchase contracts, fell nearly 4 percent last month for a sixth straight monthly decline. It also was the lowest level seen since April 2020, when the entire real estate market was hard hit by Covid-19 lockdowns.

Still, according to a new report by Zillow researchers, it appears that home prices could see another year of significant gains. The real estate firm is now predicting that prices will climb 11.6 percent over the next twelve months. That figure is down from its previous forecast of 14.9 percent—“but it would still mark an appreciation level that is more than double the average rate (4.6%) posted since 1987,” Fortune noted.

“These downwardly revised projections would still represent a very strong housing market in the coming year. In the history of the Zillow Home Value Index, which dates back to 2000, annual growth has only exceeded the current year-ahead projection of 11.6% during this recent run of record-breaking growth, and during a several-month stretch in 2005. And while 5.73 million existing home sales would be a decrease from a remarkably strong 2021, that would mark the second-best calendar year total since 2006,” Zillow’s researchers wrote.

“Labor market conditions will be closely monitored in the coming months as future forecasts are released. Current labor market conditions are strong, but the impact of expected rate hikes from the Federal Reserve is uncertain. Continued strength in the job market would keep pressure on housing demand and thus home value growth,” they continued.